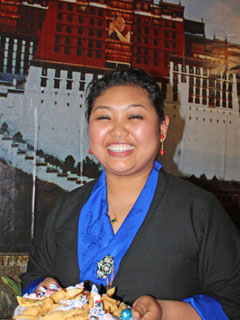 Volunteer Dechen in front of a picture of the Potala, the home of the Dalai Lama. Image©Ruth Lor Malloy 2011

At one point during the New Year celebration at the Riwoche Tibetan Buddhist Temple this past weekend, I counted the people. There were about forty worshippers and six monks. The monks were Tibetans. They wore maroon robes and they sat at one side of the room.

Almost half of the participants were non-Tibetans but they were not tourists. Most were people who obviously knew the rituals. They knelt immediately as they entered the room. Some lay prostrate for a fraction of a second or bowed two or three times, foreheads to the floor.

Most of the worshippers carried long white scarves. They walked clockwise to the front of the room, bowing before the six large statues of the saints, and the beautiful shim torma offerings that symbolize the dharma or teachings of Buddha. Some left their scarves beside the “Rinpoche,” the abbot. Many handed their scarves to the abbot, who was seated on a raised chair. He in turn placed the scarves around the necks of the worshippers and sprinkled a blessing of holy water in the form of rice wine into their hands.

People sipped the wine and then wiped their heads, their top chakra. Most then sat on mats on the floor.

Newcomers to Tibetan Buddhism had no reason to fear that they were doing the wrong thing. They just had to follow everyone else if they wanted to. I heard two newcomers asking what they should do. The women handing out barley and rice wine cheerfully explained. Not everyone bowed. Not everyone chanted.

Unlike in Tibet, there were no smoking butter lamps, no drums, and no spinning prayer wheels. In Toronto, the chants were in booklets we could follow in English and Tibetan.

As in Tibet, not everyone arrived in time for the rituals which the Rinpoche started by striking two tiny bells together. A steady stream of Tibetans, many in beautiful silk brocade robes, kept coming in during the 45-minute chants and after the chanting was over. I noticed one Tibetan mother with a reluctant teen-aged son, trying to show him what to do.

A regular attender said the temple would be open all day so people could pay their respects, receive blessings, and leave donations in white envelopes provided by the temple. The temple is usually closed except during services.

Afterwards an usher pointed us upstairs to a newly opened sanctuary, filled with more statues and thangkas, or religious scrolls. They were beautiful.

Downstairs in the basement, volunteers passed out delicious rice pudding, tea, coffee, candy and deep-fried nibbles. Here was an opportunity to talk with this wonderful mixture of celebrants. Everyone was friendly. Most spoke English. Why did non-Tibetans worship there?

“It is a powerful and peaceful place,” said one brown-haired, teen-aged school girl.

Suzanne Gorbeil has been a Buddhist for 20 years. She says, “I chose this path as the path of truth, because it deals with our human condition.”

The temple’s web-site is: http://www.riwoche.com/ . If you are planning on going to this temple during a festival, do not park in its parking lot. Other cars might block you from getting out. Heinzman is a short, dead-end street. It would be best to park on a nearby street.