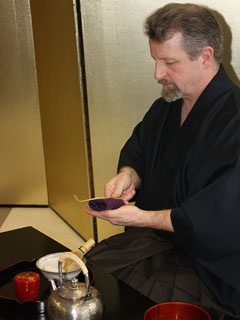 I was a little disappointed by the Japanese Haru Matsui (Spring) Festival last weekend, but only because I was hoping to see something new in Japanese kites. Kites were the theme of this year’s event. The kites displayed were traditional and certainly did not disappoint. They were mainly of fish and samurai warriors. Considering Japan’s reputation for the latest technology, I was looking for something high-tech.

It was wonderful to see a gaijin, a foreigner explain the tea ceremony. I’ve seen this ceremony in Japan and Chris was pretty good at it. He has been studying tea ceremony for five years. It is always good to see people so interested in the culture of others.

A shrine full of ancient dolls was amazing and many people wanted to have their picture taken in front of it. Among the booths was a display by the Fuji Wa Quilting Co. with a spectacular rendition by Helen Fujiki of Kyoto’s famous Golden Pavilion. It was 36 X 50 inches and though machine-stitched, it was breath-taking. 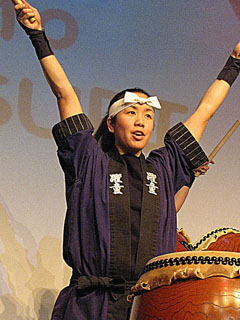 The centre was very crowded on Sunday and there were a lot of non-Japanese enjoying the show and food. I sat beside one of the many other gaijin. Nancy said she had come with a Meetup group (http://festivals.meetup.com/cities/ca/on/toronto/). This club sounded like a good idea for people who felt more comfortable doing interesting things with a group of friends than venturing alone. It looked like there were several groups of non-Japanese present. I wondered why such a large group of  people from other cultures had come to the Japanese festival, and not to festivals of other groups. Do any of you have a clue?