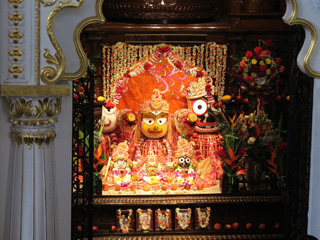 You see an intriguing-looking building as you drive around Toronto and you make a mental note to look inside some day – but so far you haven’t. The annual Doors Open program gives you an easy way to visit about 150 of them on the weekend of May 28 and 29.

You just have to choose from the list on: http://wx.toronto.ca/inter/culture/doorsopen2011.nsf/BuildingsAll?OpenView. This site shows pictures, and tells you how to get there by TTC. It tells you about parking, wheelchair access, and if you’re allowed to take pictures. It gives you maps. All you have to do is get there. A human guide inside will probably be there to welcome you, show you around, and answer questions. Entry is free too.

Among the buildings related to Toronto’s wonderful cultural mosaic are many historic buildings from Toronto’s British past like Black Creek Pioneer Village, Campbell House, Fort York and the Enoch Turner Schoolhouse (built in 1848). There’s Scadding Cabin, our oldest surviving house, built by the Queen’s Rangers in 1794.

St. James Cathedral at 65 Church St. is open. It has the highest church tower in Canada.

Inglenook Community High School is on the site of the house and barn of former slaves who escaped on the Underground Railroad in 1830. One of the Governor General Award’s winning book ‘I Got a Home in Glory Land’ by Karolyn Smardz Frost was based on this important national site.

The impressive new Native Child and Family Services on College and Yonge, with its Healing Lodge and native decor, will be open and is worth a visit.

Among the religious buildings is the ISKCON Hari Krishna Temple on Avenue Road (see our Blog No. 91. Hari Krishna’s Holi Festival). Three mosques will be welcoming guests too. New to the program is the Kadampa Meditation Centre which is a Buddhist Temple on Crawford Street south of Christie Pits. Then there’s the exquisite Riwoche Tibetan Buddhist Temple with its beautiful statues and new addition. It is in the Junction. For these temples and mosques, be sure to dress modestly and leave your shoes at the door. Women should have something to cover their heads at Indian temples and at mosques. Here’s a chance to ask why.

Two synagogues will be available: Congregation Knesseth Israel in the Junction, and Kiever Synagogue in Kensington Market.

St. Andrews Church near University and King in downtown Toronto is a Scottish church. It houses the 48th Highlanders museum. The regiment was formed in 1891. St. Stanislaus Kostka Parish church became a Polish church in downtown Toronto in 1911. St. George’s Greek Orthodox church is on Bond Street near Yonge and Dundas. It has a very impressive interior.

The Japan Foundation on Bloor Street is near the Royal Ontario Museum.

If you can see more than four of these in a day, I’ll be amazed. They are all over the city. I’d be delighted to hear which ones you visited and what you learned there.