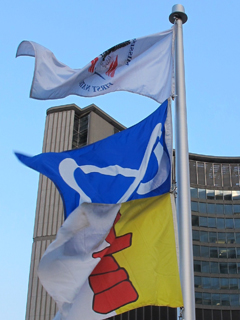 What happened at the Aboriginal Day Sunrise Ceremony at City Hall this week? Hopefully, those of you who have been hesitating about doing something different will be eager to go next year after reading this. Here is what you might expect:

Well, 75 people of various cultural backgrounds showed up for the 5:30 a.m. event. It was held out of doors on the podium up the ramp on the east side of the building. We sat on chairs in a large circle.

Native elder Alex Jacobs made sure we all purified ourselves with smudge, the smoke from burning herbs. It was probably sage. He even took the bowl over to late comers. This purification happens at all or most sacred Native events. Many people there already knew how to direct the smoke with their hands over their heads and faces. The rest of us just followed. 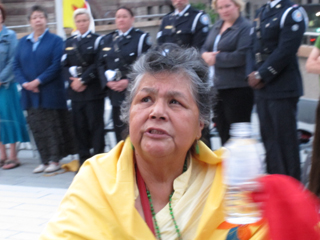 Kakekayafi Joann spoke of the importance of water. An elder and a child distributed cups of water and we drank. A pipe lit with tobacco was carried from person to person. Those who wished to inhale did so. An elder symbolically tapped the shoulders of those who didn’t want to smoke.

Alex Jacobs and later several other drummers sang sacred prayers as we watched the sky grow brighter and brighter. It was a beautiful morning. Unfortunately, tall buildings hid the sun. 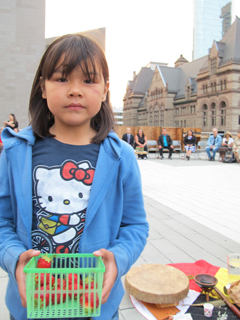 A “talking feather” was passed around. Only the person holding the feather talks. Many people held it while they contributed a few words of greeting. Then three little girls gave us strawberries, the first fruit of the season.

Toronto City Councillor Mike Layton and Mae Maracle of the city’s Office of Equity, Diversity and Human Rights spoke. A representative of the host organization, the Elder’s Council, invited everyone to breakfast. Then three flags were raised. They were the flags of the Mississauga New Credit First Nation, Metis, and Nunavut. The Mississauga New Credit First Nation originally lived on the land that is now Toronto.

Several of us got lost going from the podium to the breakfast room above the Council Chamber, but we eventually found it. 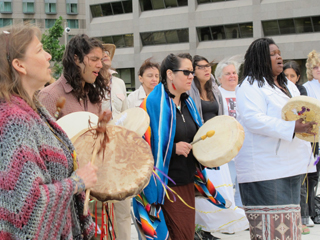 Councillor Layton, and a couple of native lawyers were also at my table. A woman from China was asking a lot of questions too.

It was a wonderful opportunity to experience a spiritual native ceremony and to ask questions, but you do have to aim for 5:30 in the morning.