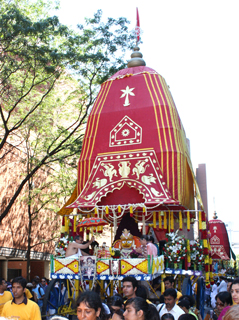 I only had seven hours so I couldn’t stay in any one place for long. I managed to take in three festivals last Saturday.

The annual Hare Krishna parade started from Asquith Avenue just south of the Toronto Reference Library. Don’t tell anyone, but my favourite time to photograph a parade is right before it starts. People in costume are usually waiting around, practising, and putting finishing touches on their floats. You can ask people to hold still for your camera. Close-ups make for stronger pictures. The pre-parade is also a good place to ask questions; however, if too many people do this, organizers might ban us. 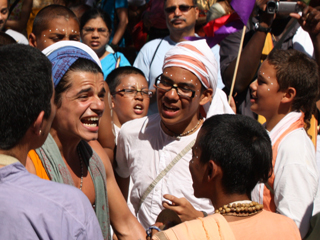 About a hundred people, many in Indian dress, were milling around. Men and women in yellow “Volunteer” tee shirts were holding the ropes in front of three giant chariots. Each chariot carried a statue of Krishna. They were joined by older women in saris. They were probably making sure they too could perform this special service of pulling their beloved god through Toronto streets. A policeman was telling one of the organizers that the 40 foot towers on the chariots would not fit below the wires across Yonge Street. The organizer assured him that the wires would be raised. 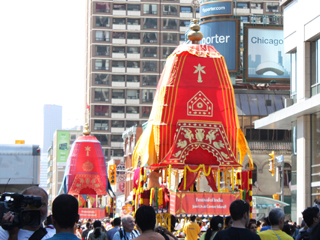 The tune was catchy and I found myself singing along.

The chariots headed south on Yonge Street to the Centre Island ferry. I knew I wouldn’t have time to join them, even though there would be a lot of interesting activity there. With two festivals on Centre Island that day, I guessed the lineups would be prohibitively long. I would have time for nothing else. A pedestrian tunnel to Centre Island would be a good idea, Mayor Ford. See also Blog. No. 91 for more on a Hare Krishna festival. 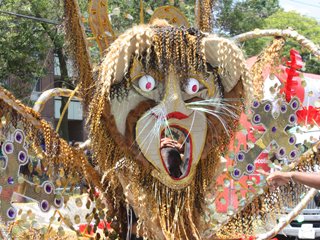 My next stop took over an hour from Yonge and Bloor. A TTC 35 bus took 40 minutes from the Jane subway station to Jane and Finch. I had been at Carabana’s  Junior Parade the year before, so I knew there was no hurry. The parade was supposed to start at 10am. I arrived about 1pm. Spectators said I had only missed two of the contestants.

Judging was done this year on Jane Street at Driftwood Ave. Bus riders had to walk the last few blocks. I took a lot of pictures along the way of the children. The area around the judges’ tent was crowded. Further north were children in their finery, waiting. It was a good place to take pictures and talk with the children and parents. 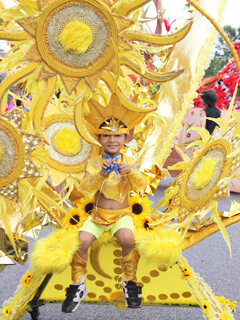 I was delighted that the costumes were original and not something out of Hollywood. They were very imaginative and elaborate, not quite as big as in the grown-up parade. The cowardly lion and a dragon were especially wonderful.

I stayed about an hour and followed a sign that said more was happening at Yorkgate Mall from 2:30 to 5:30pm. It was 1:45 by then. I could see mothers taking the youngest children home. They were tired. I heard at least one costumed teenager refusing to go home. There were less than a dozen stalls selling food. Yes, there were porta-potties available on the route, and free parking at Yorkgate and other neighbouring malls. Nearby restaurants also had facilities for their customers. I had lunch there. But I couldn’t stay for the activities.

The bus stop back to Bloor had been moved. It was at least three stops south of Finch, a long, hot walk. It was 35 degrees Centigrade.

By the time I got back downtown to my third choice of festival, it was about 3:30. Fortunately, the temperature was at least two degrees cooler by the lake. I arrived in time for the beginning of a cooking class on making a Colombian cake. The teacher was from Bogata  and spoke in Spanish. This was then translated into excellent English. A woman beside me said Colombians here don’t eat in restaurants; they prefer their own cooking. She referred me to a man who said the best Colombian restaurant was Los Arrieros, a couple blocks north of Bloor on Jane, at Ardagh. 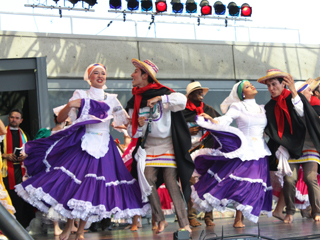 But the introduction to the individual dances was only in Spanish, which most of the standing-room only audience seemed to understand. I hope I got it right.  It should have been in English, too, for the likes of me.

I went shopping at Harbourfront too – the same white dresses I saw last year were there, lots of jewellery, and purses. I was not allowed to pay for a purse with a credit card but there was an ATM on the grounds. I’ll plan to spend more time at Harbourfront next time. I was pretty tired by then.

Should I have only done one or at the most two things? I really can’t. I don’t want to miss anything. Next Saturday there will be at least three more events I want to do. How do you make your choices?