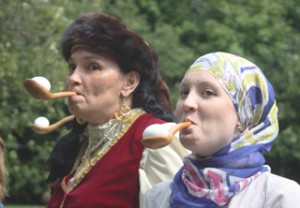 Where is Tatarstan? How many Tatars live in Toronto? Why did they come? What language do they speak? What are their national games? Do they ride horses and use a goat’s head as a polo ball? In Toronto?

At a Turkic festival earlier this year, I met some friendly Tatars. One of them sent me an invitation to their annual Sabantuy festival. It was an excellent announcement. It gave exact times for the different events.

I jumped at the opportunity to find answers to my questions. It’s a lot more fun relating to people than looking up an impersonal web-site. 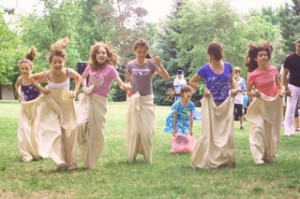 I had no problem finding the site in big G. Ross Lord Park. A sign was at the park’s entrance. The Tatar’s web-site map showed exactly where it would be. From the Web, also, I had learned that the Tatarstan flag was green, white and red horizontal stripes. Along with the Canadian flag, I could see it flying above one of the picnic areas. Some women were wearing head scarves and long skirts.

It is always a little uncomfortable going to a small function where you recognize no one and wonder if they speak English. There were about 75 people there when I arrived. The woman selling coupons understood when I asked for a schedule, a program, even though I knew it already. Asking questions is an ice-breaker. It gives you something to say, a tool with which to relate. She didn’t have a schedule, so I went around asking other people. 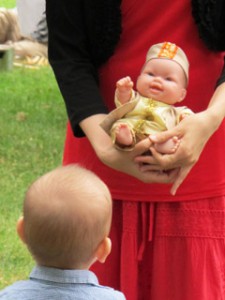 Tatar Doll Given to the Children. Copyright ©2012 Ruth Lor Malloy

I lucked onto a friendly-looking couple sitting at a picnic table. It turned out their son was the M.C. and his English was flawless. The parents had only been in Canada for five years. They had lived in Uzbekistan where he was an engineer and she was an economist, a teacher in a university there. They were retired.

From them I learned that Tatarstan is not a Central Asian country. It is actually in the middle of the Russian Federation, close to Moscow. But a lot of the people at the picnic were from elsewhere. All Tatars speak their own Turkic language and Russian, they said.

The school-aged children all seemed to speak English. In fact, instructions for the children in the games were in English except for “one, two, three.” This was the countdown for the beginning of the races. I learned to say it in Tatar, it was said so frequently. “Ber, eke, ush.” 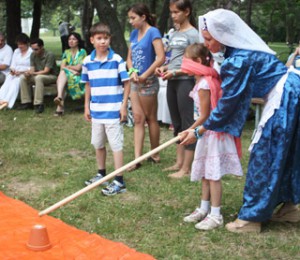 The organizers followed the schedule closely and apologized for delays. There was a break in the program for Muslim prayers. Only a small percentage of the people took part. The children sang songs in English and Tatar. There were no horses, but the children fought with pillows while on a balance beam. They raced in sacks. Adults and children competed while holding an egg on a spoon in their mouths. Another national game was breaking flower pots with a stick while blind-folded.

Adult men wrestled. Boys wrestled boys. Girls wrestled girls. The first one to fall loses. It was a lot of fun. 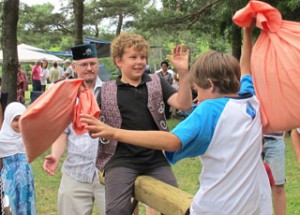 I was delighted to find the girls taking part in all these contests, even the wrestling.

Entrance to the festival was free. I paid $5 for a lottery ticket but I didn’t have to. The filling pulov (fried rice with lamb) cost $1. Two wonderful, crispy, deep-fried, calorie-laden sugar-coated pastries set me back $1. An especially delicious meat pastry was $1. Strong tea and coffee were free. The food was affordable and wonderful. The event was delightful. I think I made some new friends. 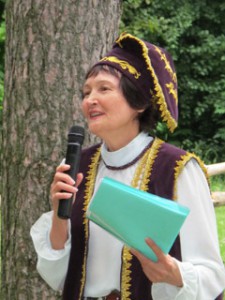 “There are more than 2000 Tatars in Toronto & the GTA,” she wrote. “Most people with Tatar roots have been assimilated with other nations. Tatar people were spread all over the world especially after World War 1 and during the World War 2. The older generation came to the USA and Canada from Turkey, Japan, and China after escaping the wars and the 1917 Russian revolution. The younger generation at the park last Sunday were 1990-2012 immigrants.”

It appears that Toronto is reuniting part of the Tatar diaspora.

I was sorry more non-Tatars weren’t there to enjoy this event too. Why didn’t you come? Everyone was invited. The multicultural Tatars are very interesting even without horses.

The Ontario Tatar web-site in English is at: http://bit.ly/OKN8uR .