I was first attracted to the watercolour tones of her paintings seen on the Web. There was a Chinese look to them. I especially liked the “S” curve on her picture of fish, only hers weren’t carp or gold fish; hers were salmon swimming upstream in the Credit River – Toronto’s Credit River. I had seen that curve on a favourite Chinese fish painting. I suspected that painter Virginia Lee had been influenced by Chinese art.

Then I attended the opening of her show “Pearl Wisdom” earlier this month. I found it delightful. Virginia Lee was indeed of Chinese origin, and she learned Chinese painting in her native Hong Kong. After arriving in Canada at the age of 16, she studied at the Ontario College of Art. Though she now feels more Canadian than Chinese, the Chinese influences in her work are very much there. Her human figures, if she does include them, like those in Chinese landscape paintings, are tiny, overwhelmed by the bigger picture. 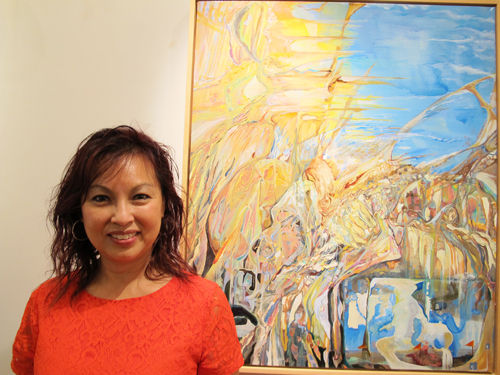 Her bigger picture is vast and China still figures largely in them. As she describes her art, she talks about the dinosaur dragons found along the Yangtze River. “China was a dinosaur before the Great Leap Forward.” She points to a waterfall in one pictures, symbolic of the Yangtze River dam, a real electric cord attached to the painting, like “a leash pulling the dinosaur forward into the future.”

Her work is now three-dimensional, no longer two-dimensional like traditional Chinese painting. Using acrylic paint now makes texture possible. She also spins a real, attached pinwheel, representing a fortune wheel. “Each time they turn the wheel, their fortune changes for the better,” she says of China. In one of her paintings are three hanks of human hair, representing the hair cut forcibly from women during China’s 1960-70s Cultural Revolution.

She is interested in the families with children adopted from China and among the embedded “pearls” is a picture of a woman, one of the mothers who gave up their daughters. She is playing with concepts. Pearls grow from irritants, she says, into something beautiful. 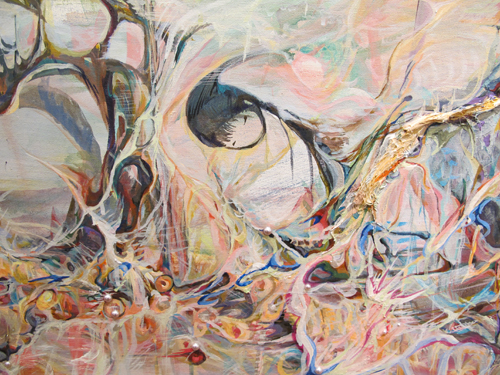 It is interesting to follow her development from realistic watercolours to today’s abstracts, from Hong Kong to Canada.

Her exhibition continues to the end of October at Patrick International Fine Art, 190 Davenport Road. Tel. 647-825-4255. For a collection of her works, see: http://www.virginialeeart.com/art.html. Ruth.

Please tell us about current art exhibitions by artists influenced by artistic styles in both their country of origin and Canada. Email us at: ruthlormalloy@gmail.com .