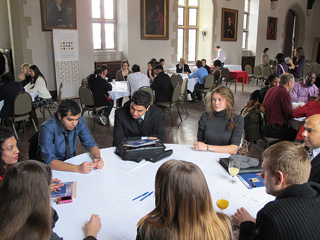 On one of the most significant days of your life, would you be happy to exchange personal stories with other such people?

Last week, I cruised around the imposing Seely Hall of Trinity College. I was listening in on the conversations of 24 important people from 12 different countries. It was during the hour before they took a pledge of “loyalty and allegiance to Canada and Her Majesty Elizabeth the Second, Queen of Canada.” In a few minutes, they would become citizens of Canada.

Their comments sounded like an enthusiastic class in English conversation as they asked each other, “How did you come to Canada?” “Why did you come?” “Do you have to give up your original citizenship?” There were mainly smiles and laughter. Most of them seemed to enjoy the exchange.

There was laughter as an Indian said, “I have to relinquish my passport to the Indian High Commission when I become a citizen. We have to give them over $200 just for them to cut it up.” 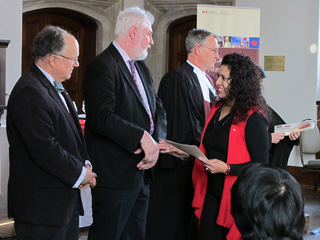 A few of Canada’s citizenship ceremonies have become more than a serious formality. In providing a social component to them, the Institute of Canadian Citizenship hopes that they will be “launching pads to further engagement.”

Unfortunately, this institute was only able to provide these “ round tables” for 31 ceremonies in 2010. Every year there are thousands of citizenship ceremonies.

“We would like the institute to grow,” said Heather Steel, Acting National Program Manager, Building Citizenship. Her organization was founded by the Right Honourable Adrienne Clarkson, a former governnor-general of Canada, and her husband and distinguished author John Ralston Saul. It is dedicated to engaging Canadians about citizenship. It “aspires to a society in which all citizens are welcomed and included as equals and considers the well-being of others a collective responsibility. “

I only found one person who did not want to receive my congratulatory handshake at the end of the ceremony. He was there with his family, who immediately stepped in with smiles and thanks. I don’t know why he was so unhappy. I can only guess. I hope they all made new, lasting friends.

Anyone can attend these citizenship ceremonies and welcome newcomers. The Institute for Canadian Citizenship web-site gives dates and venues. It is at www.icc-icc.ca/en/.