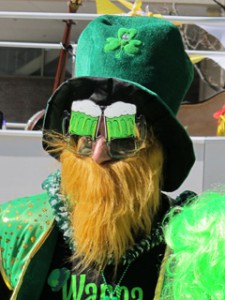 The annual St. Patrick’s Day parade last Sunday was as much fun as ever. I’ve seen the last three. This year it took an hour to pass by my favourite spot at St. George and Bloor.

This year, there were no cute references to President Obama’s Irish roots, but the boat on a float celebrating the Titanic’s 100th anniversary demise drew many a chuckle. Tee-shirts on the crew and a sign on the stern read “It was okay when it left Belfast.” Funny too was the “bilge water” spilling onto Toronto streets.

This year was the first time I saw sun glasses shaped like beer mugs, as well as over-sized shamrocks. It’s amazing how creative the Irish are. 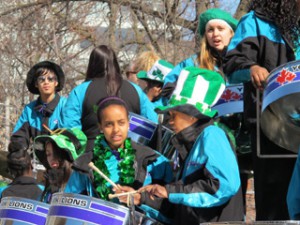 It was great to see a steel band with multiracial musicians from the York Lions Club. Kilted bands added the mournful sound of bag pipes. I was disappointed that the Philippine Heritage Band from Vaughan wasn’t wearing any green at all. It didn’t even have an Irish flag among its eight. It made up for it by playing Irish songs.

Then there were a few beautiful Irish wolf hounds and Irish setters. A half-dozen gull-wing Irish-built DeLorean cars from the early 1980s showed they were still around. Bearded leprechauns and green haired children, firemen and policemen with green wreaths around their necks, and platoons of dancers made us smile. A tank from the Canadian forces and beauty queen, Miss Canada, were there too. 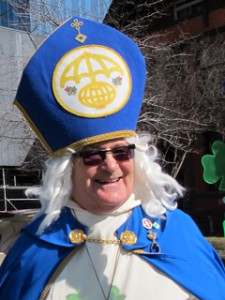 I met a robed man who called himself an “Irish saint.” If it rains on his day, July 15, it will rain for 30 days, he said. I couldn’t make out the name, and a web search afterwards revealed no clues. He was wearing a tall hat with an umbrella on it. Was it more blarney?

A group with the web-site www.vitacls.org passed out cards to remind us that not all is well with the world. Vita helps people with mental illness issues. Its card asked us to be careful with our language. Words like “retard” should not be used. They hurt.

If you saw the parade, please let us know what you thought about it and why.