Ruth writes: When I was in India over a decade ago, I saw several men

wearing rectangular white masks over their noses. They were dressed in white

robes. As they walked along the streets with brooms, they gently swept

the ground in front of their bare feet. They were Shwetambar Jain

monks trying to avoid killing living organisms — like insects. They 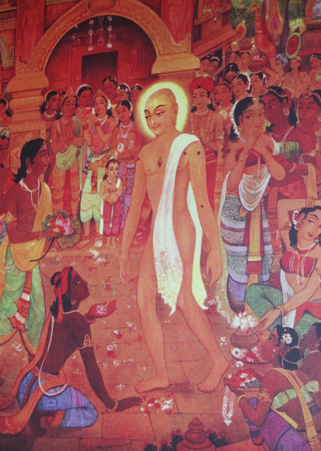 Then I heard about another sect of Jain monks called Digambar.

These men did not even wear clothes. They were trying to use as little

of the earth’s resources as possible. They still do not use vehicles,

I admired their idealism. Today we too are concerned about carbon

footprints. The Jain religion began in India at least 5000 years ago. 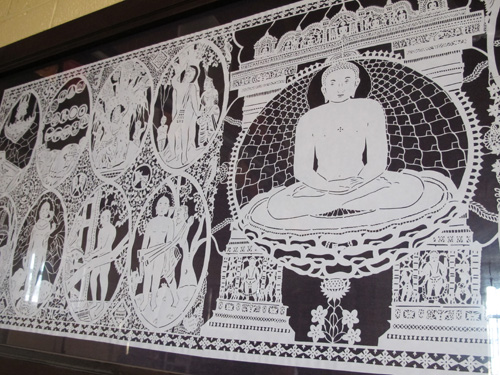 About 6000 Jains live in Toronto today. The walls of their temple are

covered with pictures of their spiritual teachers such as Mahavira.

Like Buddhism’s Prince Siddartha, Mahavira gave up a life of luxury to

search for the reason for human suffering and existence. Mahavira also

life so they can escape the endless cycle of birth and reincarnation.

Last week I visited a Jain temple in Etobicoke. Pictures of Mahavira’s life were on the walls.

Captions were in English, Hindi and Gujarati. Most Indian Jains speak Hindi,

said Kirti Shah, a member of the Jain Society who was showing me around.

Prominently placed in the former Anglican church building was a large

mural of the 24 Bhagwan Tirthankaras or religious teachers of whom

Mahavira was the last. Shah explained that they were all equal but

some are more popular with worshippers than others. They were all

male, said Kirti though some Swetambar Jains believe that one was female. 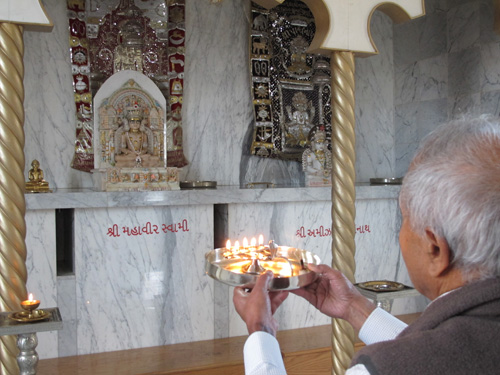 statues of the Tirthankaras of the Svetambara sect. These role-models

are not worshipped or petitioned. Rather, Jains pay homage to them as

celibacy, and non-possessiveness within their current practical 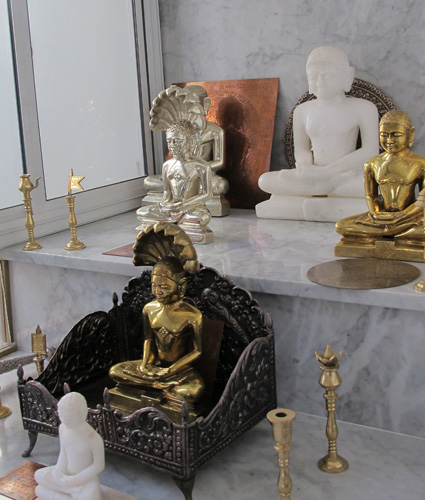 At another altar were statues of monks from the Digambara sect. The

nirvana or extinction. I thought it exemplary that members of

differing sects could worship in the same room and work peacefully

Kirti is not a monk. He admires people who live as simply as possible.

He showed me the poster he was promoting. I had seen it recently

around Toronto. On it was “Why do we love dogs but eat pigs who are also

loveable, intelligent, and social?” It is a good question. Most Jains

are vegetarian and do not even eat root vegetables because they believe these vegetables contain multiple lives. 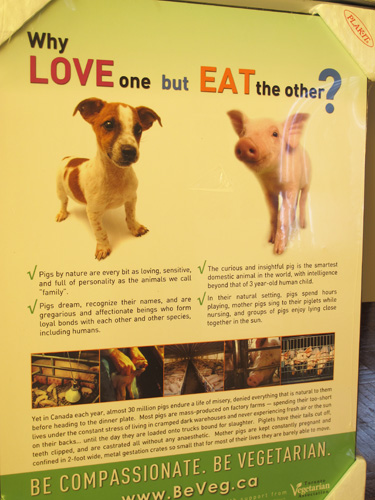 The symbol of Jainism includes a swastika, a Sanskrit word that means 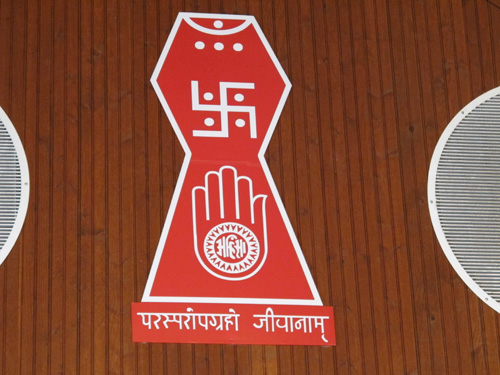 population of Toronto is growing quickly from immigration and needs

the space. It will help keep their ideals alive. 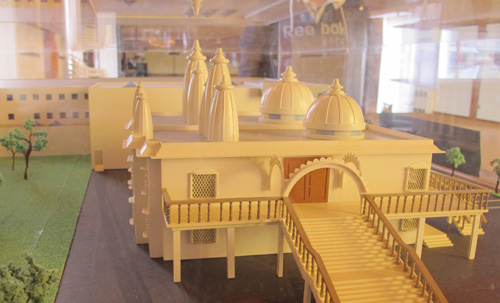 The current temple is at 48 Rosemeade Avenue with a membership of a thousand families. Telephone 416-251-8112. Its email is info@isotcanada.org. Its website: http://www.jsotcanada.org/ .