I’m delighted with the choice made last week. Viola Desmond was not a famous poet, a suffragette nor an Olympian. She was an ordinary Canadian woman who ran a school of “beauty culture” and sold her own hair and skin products in Nova Scotia. She didn’t have the power of celebrity to support what she did.

One day while waiting for repairs to her car, she went to a movie to pass the time. It was 1946. She was black and the cinema had a racist policy. The usher told her to move to the black section in the balcony. She refused because she wanted to assert her rights to a seat available to others. The police arrested and jailed her for violating a tradition in New Glasgow, Nova Scotia. Since then, she continued to inspire others about their rights. She died in 1965.

In 2010, the Premier of Nova Scotia Darrell Dexter pronounced “on behalf of the Nova Scotia government, I sincerely apologize to Mrs. Viola Desmond’s family and to all African Nova Scotians for the racial discrimination she was subjected to by the justice system . . . We recognize today that the act for which Viola Desmond was arrested, was an act of courage, not an offence.” 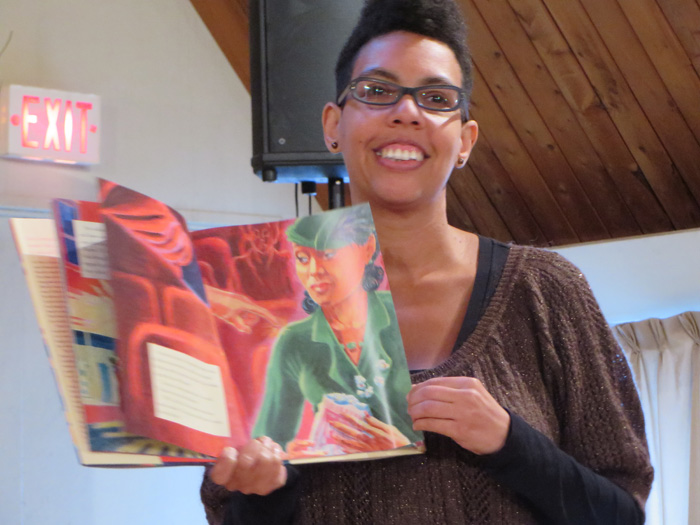 I first heard about Viola Desmond in 2013 when Jody Nyasha Warner read from her book Viola Desmond Won’t Be Budged at a book fair organized by A Different Book List. Hers is a book written for children. Hopefully, a new generation is learning about this Canadian heroine.

While I feel that many other Canadian women deserve the honour of being recognized officially, the choice shows that racial discrimination did exist in Canada and is not to be tolerated. Needless to say, racial discrimination still exists here today, but that’s another story. We still need people, ordinary people, with Desmond’s guts to fight it.

More about Viola Desmond is in the Canadian encyclopedia: http://www.thecanadianencyclopedia.ca/en/article/viola-desmond/.

A Different Booklist is at: http://www.adifferentbooklist.com.