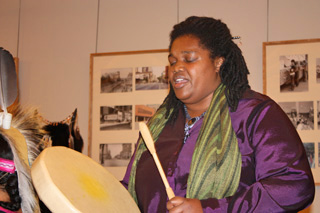 I arrived at 5:30pm, the appointed time. The Native Centre is in a massive mansion at 16 Spadina Road, north of Bloor. Michele was in charge. She greeted me with a big welcoming smile. We had met at the Reference Library.  (See previous blog.)

The sign-in book had a place to put in our “nation,” as in “Cree” or “Ojibway.” Someone had written “English.” I wrote “Chinese-Canadian.”  I have never thought of “Chinese-Canadian” as a “nation.” It was an interesting concept.

About six people were there.  More trickled in as the evening progressed. When I left an hour later, there must have been more than 30. Most were women.

A half-dozen simple hand drums of various sizes lay on a blanket on the floor. They were in the middle of the circle of chairs. Each drum had been placed on its own mat. The blanket was an altar. People who had not brought their own drums could pick up one to use.  Each person walked around the blanket clock-wise, symbolically following the direction of “grandfather, the sun.”

One of the young men wanted to hear the sound of the drum he had picked.  Michele said gently, “When you drum, you’re in prayer. You’re connecting with people around you.”  First Nations people sound their drums only once to hear the voice of the drum. I treated my drum with more respect after that.

She told us that drumming is not easy. “Don’t worry if you don’t get the beat right.”

One of the women took a smudge pot of smoking sage around to each person.  This woman also moved around the room clock-wise too. I thought of the Tibetan Buddhist temples I’ve visited. Most Tibetan Buddhists walk around sacred places clock-wise also but for an unrelated reason.

Each of us cleansed our faces and heads, the drums and drumsticks, with the smoke.

Michele then asked us each to introduce ourselves and sing a song. We could “pass” on the song.  Two men spoke in quiet voices and then burst out singing and chanting loudly. We drummed in time and sang the vocables, which were easy phrases to repeat.

The drumming was like meditation. It was relaxing. I didn’t expect that. I had to leave before the end.  I was falling asleep.  I’m going back some other time to try again.