16. Bazaar at a Japanese Church 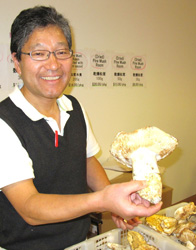 I didn’t think the annual bazaar at the Japanese Buddhist Church at 1011 Sheppard West fitted the ground rules for my calendar. It was free but there were no performances. Could visitors afford the food? Its website (www.tbc.on.ca) showed an exquisite Buddha. I wanted to see it.

My friend Anne Winter talked me into the visit. I figured the goods on sale would be interesting and different. The food was probably genuine. I love Japanese food.

I arrived exactly on time. The parking lot was full. A huge crowd was waiting at the door. Almost all looked Japanese. By the time I found a parking place and walked back, the queue had disappeared inside.

The shopping was indeed interesting, though the room was a little crowded. Like other bazaars, there were handmade baby’s clothes and carrot cake. There were also Japanese sweets and sushi. Anne, who is not Japanese, is a fan of all things Japanese. She recommended the sushi because it was authentically Japanese.

A man was selling huge, rare pine mushrooms and gobo, Japanese culinary favourites. There were children’s books in English with Japanese heroes, and delicate dolls in kimonos.

We followed the crowds downstairs to the food. A woman in the queue said she was of Japanese origin. She talked about her parents who had been in an internment camp in B.C. in the 1940s. They never taught her the language. They were afraid to speak Japanese.

We sat at a table with a dozen other people. They also spoke English. Canada has few new immigrants from Japan. Our conversations were light and pleasant. They were exactly the kind of enlightening conversations I hoped the mingling of different peoples would have.

A woman asked why I had come. I explained about my blog. She had never been to a festival of another group. She’d like to see a Tibetan festival, she said. A bowl of thick udon buckwheat noodles was $6. It was the best Udon noodles I had ever tasted.  I was enjoying myself so much, I forgot to look for the Buddha.