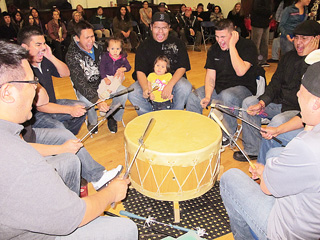 This free weekly social provides a wonderful opportunity to gab with First Nations folk, but only if you make an effort. (See Twitter.com/TorontoMulticul for details.) Last Thursday, the emcee asked attenders to shake hands with their neighbours around the circle. Beyond that, I didn’t see many people relating to each other, except for those who obviously knew each other already.

Most of the several visible minority visitors just sat and watched.  Anyone who was not First Nations was a visible minority there. It was great to see so many of us there, but I didn’t see any of us getting up to dance before I left. I have to admit I didn’t dance either but the Caucasian couple beside me didn’t even try the soup and tea offered to everyone there. They had come out of curiosity, they said. The soup was tasty and resembled minestrone. 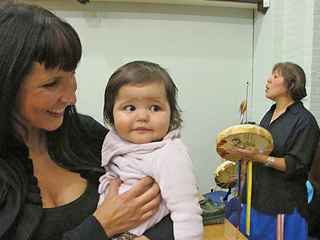 I think the problem is that few people know what to say to strangers. How about “I’m here for the first time. What’s going to happen?” or “Do you come every week?” and “Why?” or “How old is your daughter?” and “Does she understand any First Nations languages?”

Maybe “What do you think of the new Indian Act?” would get some spirited conversation going.

A lot of children were there, some of them drumming and dancing. Two toddlers sat among the men at the big, sacred drum. It was easy to feel Mother Earth’s heart when they beat it. I wondered about the children’s tender young ears, but the drum’s enormous voice didn’t seem to bother them.

The men sang and chanted. They hesitated later when I asked for permission to take photos, but then two of the men nodded. 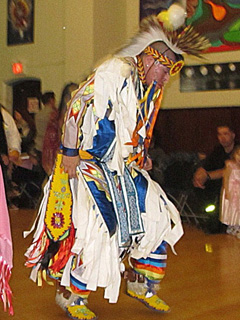 As for the dancers, some of them were so energetic and graceful, that I preferred to watch instead of participate. One dancer in elegant white regalia was so agile and quick,  it was hard to take a photo. I tried to figure out the steps. Except for him, everyone else’s steps were relatively simple. One young woman’s movement were reminiscent of Celtic dance. I think some non-First Nationals did dance but it can be hard at times to tell who is what.

I photographed a woman and her baby beside one of Michele’s drummers. The mother was a professor at the University of Toronto and was from Yellowknife. She was of the Dene nation.

I’ve mentioned Michele in previous blogs numbers 10 and 14. The emcee  honoured her last evening with a white feather for her group’s wonderful music. People were gathered around them to hear it better.

Maybe you can ask what the words mean?

Do you have any other ideas on how to overcome shyness in situations like this? How to make friends? It might help to go back on Thursdays more than once. I’d love to.