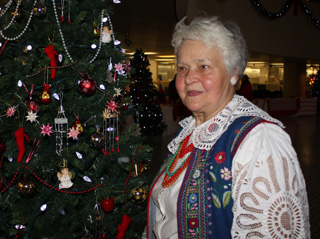 The wonderful women at the City Hall’s Christmas Around the World told me about the following churches. If you know about any of these choirs and their music, please let us know. It doesn’t matter if the lyrics are in Serbian or Tagalog.

It’s the spirit that counts.

The Slovaks talked about the Cathedral of the Nativity of the Mother of God at 257 Shaw St. (at Dundas). It has a mass and then a choral group, and separate services in English and Slovenian. There’s also St. Cyril and Methodius Slovak Roman Catholic Church in Mississauga. It has a mass on December 25. (5255 Thornwood Drive. Tel. 905-712-1200).

This group was also enthusiastic about St. Michael’s Cathedral Choir School, which will be singing on Christmas Eve at 7pm and 11pm. Its Elementary Choir (Grades 3 and 4) has a tradition of singing on Christmas morning. The cathedral is at 200 Church Street between Dundas and Shuter. Tel. 416-364-0234. http://www.torstm.com/StMikes/.

Under their typical, star-shaped Christmas lanterns, the Filipinas said, “Look in Balita, the Filipino newspaper. Many Filipinas go to St. Catherine of Siena Catholic church. It has a Filipino choir and is at 2340 Hurontario St, Mississauga at Queensway. Tel. 905-272-1454. www.stcatherine.ca. E-mail: officestcathe@rogers.com.