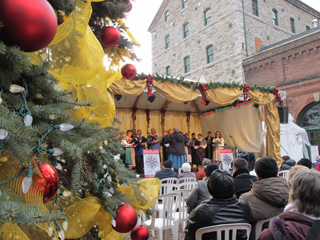 Did you get to the Christmas Market in the Distillery District? I finally did on the last Saturday, and it was crowded. There were so many people I had to eat my North African kofta in the cold. At least I had a seat near the stage. I guess I should have eaten earlier or later than lunch time. There were only a few tables inside the buildings. It would have been nicer if there had been heat lamps outside – not just for eating but for the concerts. The Swiss singers were lovely – but it was too cold to sit through an hour of singing.

The stalls were cute – like those I remembered in Prague. I found 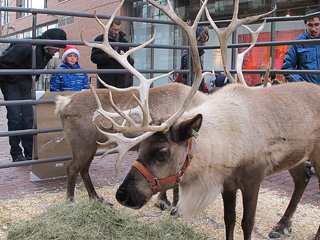 sweets from many places in Europe, including gingerbread and cookies from a Dutch bakery, which were pronounced genuine when I gave them to a Dutch friend that evening. There were two live reindeer in a pen, a Santa Claus, games for the kids, and wandering carollers. 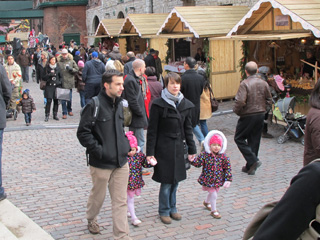 The items for sale were mostly more for children and for decorating your Christmas table, and included a German nutcracker for over $130. There were long queues for German sausages. One person complained they were giving the place a greasy smell. There was a free shuttle bus from the front of Union Station – something I’ll remember for next year when I go again. I did learn about the regular no. 72 TTC bus to the Distillery District from the southeast corner of Bay and Front, something to remember for the St. Lawrence Market too.