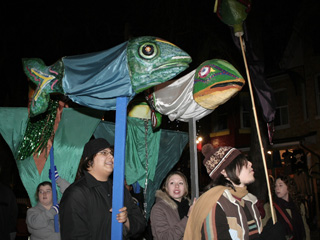 I’ve been to two of these Kensington Market December 21 winter solstice celebrations in past years. They are magical for children, many of whom sit on their fathers’ shoulders to see the multicultural parade. Stilt walkers, giant puppets, native drums, and lots of fire fascinate young and old. There’s a workshop for making lanterns the week before. See web-site below.

Be sure to dress warmly. The parade starts at 6:30pm at the corner of Oxford and Augusta.  (From the Spadina subway station, take a streetcar south to College or Nassau and then follow the crowds west.) You can just stand and watch or walk in the parade banging your own pots and pans or carrying a lantern. If it’s too cold, Kensington and nearby Chinatown have lots of cafes but they are usually full by the end of the parade. You might get warm if you head to the bonfire at a nearby park for the big finale at 8pm.

Some people go every year. If the weather isn’t too bad, there will be thousands. Would you go again next year? It’s lots of fun for the family. For details, see: http://redpepperspectacle.wordpress.com/festival-of-lights/.