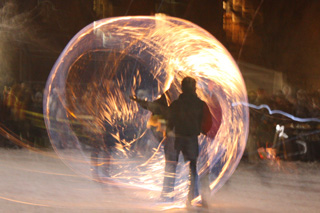 The 21st annual Winter Solstice celebration in Kensington Market this year went smoothly. This was my third year.

In previous years, the crowd in Alexandra Park at the end of the parade was so thick, I couldn’t get decent pictures there. This year, I made a point to go early, and got a front row place outside the ropes and waited. Next year, if you want a seat, bring your own chair and park it there. By the end of the event, people were standing behind me about ten deep.

Crowds of families with children started gathering as the parade approached. A man kept splashing kerosene on a statue in the centre of the circle. Then the parade, heads of puppets bobbing above the crowds, entered the arena. A band played. Giant fish, animals and monsters danced by. It was very dark, and you needed a good flash or high ISO to get any pictures.

The parade continued walking in the circle several times. A couple bands played. A First Nations group drummed. Fire dancers pleased the crowd. One group jumped a flaming fire rope. One man ate fire or extinguished it on his bare body. The dancers lit the kerosene-soaked bon fire. It burst into flames.  A full moon smiled from the east. People were friendly. It was a lovely evening.