Levees were started in New France, now Quebec, in 1646 by its Governor. They were opportunities to pass on news from France and wish citizens a happy new year. Fur traders were expected to renew their allegiance to the Crown, says Wikipedia. The custom continues here centuries later, with mayors and the Queen’s representatives holding open house for a few hours on New Years Day. 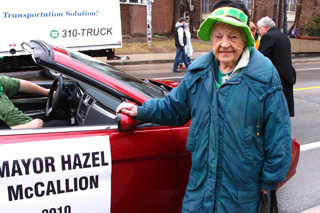 I usually remember Toronto’s New Year’s Day Levees the day after they occur, when pictures appear in newspapers. This year I’ll try to go to one.  This custom takes places in several places around the Greater Toronto Area. The most interesting should be at Fort York, open free to the public for the occasion an hour before and after, so you can explore that bit of historical Toronto. The fort dates from 1793 and usually charges an entrance fee. This privilege is in anticipation of the 200th anniversary of the War of 1812 between the U.S. and Canada. Officiating will be the Honourable David C. Onley, Lieutenant Governor of Ontario. He represents Queen Elizabeth in Ontario.

Mississauga will have “ an afternoon of free entertainment and activities for the whole family, as well as the chance to meet the Mayor and Members of Council.” 89-year-old Mayor Hazel McCallion is indeed someone special to meet. Hers is one of the few parts of  Greater Toronto that is in good financial shape. The entertainment will include Irish, African, Filipino, South Asian, and First Nations performers.

I expect the largest crowd will be greeting the recently-elected mayor of Toronto, Rob Ford,  at Toronto’s City Hall.  For details, see January 1, 2011, www.TorontoMulticulturalCalendar.com.