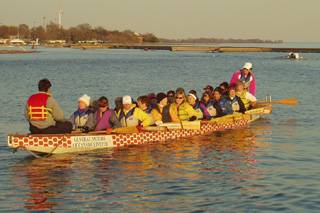 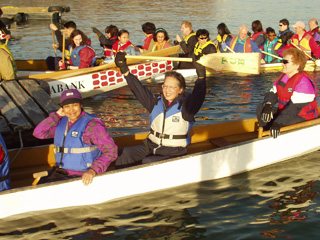 Dragon-boating is an exhilarating team sport. Racers may be 15 years of age and up. For breast-cancer survivors, it’s one of the best therapies. My friend Margaret Young started racing when she was over 70.

You can join as a corporate, university, or community team. You don’t have to be Chinese to take part. In Toronto, it’s been about a third Chinese, a third Caucasian, and a third other ethnic groups. Teams often are ethnically mixed. Talk to your boss about a company team if you don’t have one already. Be prepared, however, to spend hours of practise indoors and out. Be prepared to harden your muscles, lose weight and have a lot of fun. Money raised goes to local charities. It’s a win-win situation.

See http://www.torontodragonboat.com/. Early bird registration is Jan. 31 if you want to save money. The registration deadline is April 30. The Toronto Chinese Business Association, which organizes the event, expects 180 to 200 teams this year with 5000 participants.