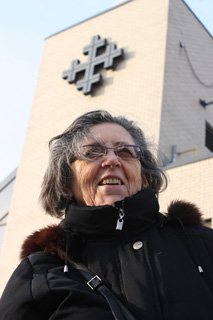 It’s not “Coptic Orthodox Christmas,” Helene Moussa says about January 7. “It’s the ‘Feast of the Nativity.’ We celebrate the birth of Christ, the incarnation of God.”

I was trying to learn about the Orthodox custom. Helene is one of the marvellous people I’ve met in my quest for Multicultural Toronto. She is volunteer curator of the Coptic Museum at St. Mark’s Coptic Church in Scarborough. I got excited when I first heard that St. Mark’s has the only Coptic museum outside of Egypt. It helps make Toronto a world-class city.

Coptic Christians celebrate the Nativity partly by fasting for 43 days before, eating no meat, no milk products like cheese, and no meat sauces, she says. Fasting is seen as a discipline for the body so it can focus on the spirituality of the season.

In earlier times, the Nativity feast also meant new clothes. It still means a midnight service on the 6th of January and family gatherings on the 7th. The holiday is always on the 7th. The date doesn’t change like Easter, she says. It follows the Julian calendar.

St. Mark’s does not put up a Christmas tree. It displays a large creche in January. The Coptic Orthodox church is the oldest Christian church in the world. It was founded by St. Mark, one of the apostles of Jesus from whose birth the western world dates its calendar.

As she spoke, I became equally fascinated by Helene herself. She is the author of Storm and Sanctuary, The Journey of Ethiopian and Eritrean Women Refugees, her published doctoral thesis at the U. Of T. This work has helped Canada understand these unique refugees. Among other pursuits, she has taught sociology, iconography, social work, and social development at universities in Egypt, Ethiopia, and Canada. Her wide range of interests is amazing.

“I have a life-long passion for art and the study of culture, identity and history,” she says.

The daughter of an Egyptian father and an American mother, Helene was born in Ethiopia and went to Catholic schools there. She has always celebrated both December 25 and January 7. On December 25, she has turkey, a tree, and presents.

Helene has brought to Canada an understanding of several ancient traditions.