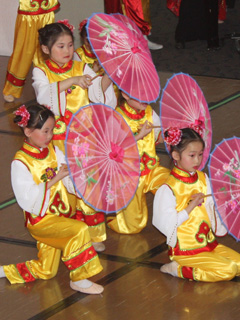 Chinese New Year’s Day is actually February 3 this year, but celebrations in Toronto started as early as January 22. They go on to the traditional end, which is the Lantern Festival on the 15thday or February 18.

Many of your Chinese friends might not know about the Lantern Festival. Traditions in the motherland and in the Chinese diaspora have changed and there are regional differences in China itself. But for all Chinese, it is the year of the Rabbit, which will end on January 22, 2012.

In China, the event is known as the Spring Festival and the official holiday there is February 2 to 8. Hong Kong seems to be the best place to celebrate. If you want to learn how they celebrate there, See: http://www.discoverhongkong.com/chinesenewyear/eng/index.jsp .
The date changes every year and is dependent on the phases of the moon. Korean and Vietnamese people also celebrate their New Year on February 3 this year. For all of them, it is a day of family celebrations and banquets. I like to think it’s also the beginning of the end of the cold weather.

There are several different ways of wishing your Chinese friends a happy new year. The Cantonese (Hong Kong and southern China) usually say “gong hay fat choi.” In the national language spoken by everyone in China, it’s “gong xi fa cai.” These words express wishes for prosperity. Ask someone Chinese to tell you how to say it correctly with the proper tones.

For many Chinese, what you do on the first day affects what will happen to you for the whole year. You wear new clothes. You don’t wash your hair or sweep your home or you’ll sweep away the good luck. You will have a banquet with special ingredients. You hope the banquets will continue all year. It is important to be pleasant to everyone.

Chinese New Year’s is not an official holiday in Toronto even though there are over 420,000 people who claimed Chinese as their mother tongue in our last census in 2006. Stores and malls like the Pacific Mall in Markham are usually open.