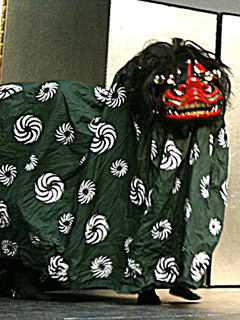 Anne Winter wrote about last weekend’s Japanese festival. The Japanese New Year is actually January 1 but a group of Japanese organizations decided to
celebrate at a less busy time, January 23, at the Japanese Canadian Cultural Centre.

It was a wonderful day. At a shrine you could leave lucky money, ring a bell, and do the Buddhist clapping prayer. On a special Buddhist stick you could write a wish to be sent to Japan for a ritual burning for good luck.  You could watch the pounding of the mochi, a rice mulch which is made into sweets.  Of course they gave all of us mochi to eat.  We saw many traditional dances and heard traditional musical instruments. It was a wonderful festive atmosphere.

I’ve been to many Japanese events but this was the best traditional one I have seen so far.