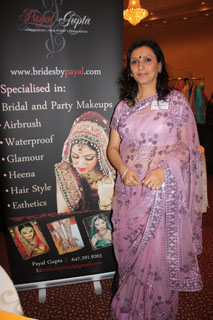 The Dreams Wedding Show was disappointing only because there were no male models dressed in the beautiful tunics that I saw in the South Asian Bridal Show a couple of years ago. (See Blog 49.)

I had a lot of fun because I learned a lot about South Asian wedding customs and chatted with many of the exhibitors. Only one person said I couldn’t take pictures. She later changed her mind when she discovered I wasn’t a competitor out to steal her wedding cake designs.

I talked with two spectators as we sat watching the fashion show and dances together. Though of Indian origin, they came to Canada via Trinidad and Jamaica. A third woman in a dramatic black salwar kameez trimmed with amazing red embroidery said she was Pakistani. The people sitting behind us talked about relatives in the Punjab.

Everyone was friendly and helpful. I felt welcomed, even though I seemed to be the only person not of South Asian descent there (except for some exhibitors). I wish more of you could have been there. Things I learned: some grooms still arrive at Indian weddings riding a white horse, both in India and in Toronto. Indian weddings can take three days. This is in addition to the week before the wedding, when brides might be confined to their homes wearing a mask of turmeric, chick peas, and/or sandalwood to make their skin more beautiful. 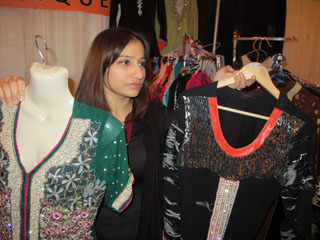 If it is a Hindu-Moslem wedding, it might take more than three days as each culture goes through its own rituals. Weddings are not short events. The number of days depend on the agreement between the principals.

Henna designs for brides are traditionally only for the hands and feet, even though some people put them on shoulders and other parts of the body. There are no special henna designs for brides. The henna can last from one to three weeks in spite of baths, said Payal Gupta, organizer of the show.

Hiring wedding planners is new in India, an import from Canada. You might want to see the funny Indian movie “Band Baaja Baarat.” It’s about a couple of wedding planners in West  Delhi, India. The Toronto show included four wedding planners, six photographers, and five or six clothing stalls.

The Mississauga flea market at 3090 Mavis Road (Dundas and Mavis) offers lots of embroidered clothes in the South Asian style. I’ll visit it  the next time I’m in the neighbourhood. I love embroidery.

An unexpected bonus at the show was learning that the $5 entry fee included food. Veg and non-veg food were available and the kebob wrap was tasty.