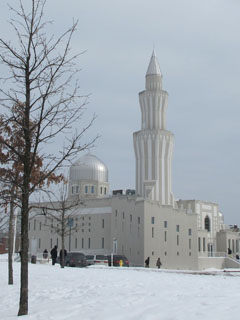 You don’t have to wait for the one-weekend-a-year Doors Open opportunity to visit many of this city’s intriguing buildings. You can visit many of Toronto’s religious buildings at other times. Recently, five of us friends went to the Baitul Islam Mosque on the northern edge of the GTA in Maple. I made my first contact with it by leaving a message on its web-site.

Farhan Khokhar of Public Relations answered. I explained that a group of us wanted to learn about Islam and see the mosque. He said they were happy to welcome any size group. We set a time and date.

This mosque is two traffic lights north of Major MacKenzie Drive at 10610 Jane Street. It and its community of houses are set on 25 acres of land. The mosque was built with elements of traditional architecture. It is beautiful. Until a sister mosque was built in Calgary, the Baitul Islam Mosque was the biggest in Canada, said our guide Zafar. 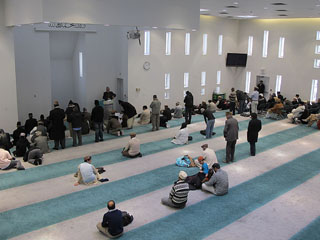 I’ve seen mosques in India, Pakistan, China, and Turkey. Some of the new mosques have no minarets because loud-speakers make minarets unnecessary. Baitul Islam Mosque with its minaret and dome brings an ethereal ancient-world feeling to Toronto.

Guide Zafar took us first to the mosque’s museum where well-organized displays explained this Muslim sect’s beliefs. Because its 19th century founder Hadhrat Mirza Glulam Ahmad claimed to be the Messiah, his community was persecuted in its homeland, the part of India that is now Pakistan. Zafar said the sect has 10,000 to 15,000 members in Toronto in several mosques in the GTA.

Tea and cookies had been thoughtfully prepared for us. Then we visited the administration building, and saw its Library stocked with religious books. 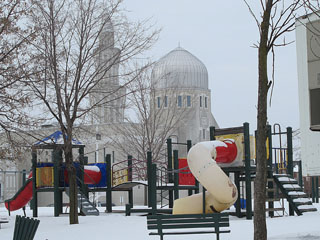 A short walk took us past the children’s playground to the mosque itself. We went into a separate entrance for women, our heads covered with scarves, our boots left outside. The women there were very friendly, smiling as they held the doors open to their prayer hall for us. They made us feel very welcome.

In other mosques, I’ve found separate sections for women in the main prayer hall. This one gave women a place of their own. Then our guide led us to the balcony overlooking the men’s prayer hall. Most of the worshippers sat or knelt on the floor. A few sat on chairs. It was the first time I’ve seen chairs in a Muslim prayer hall.

The prayer halls was simply decorated and peaceful. We were there on a Friday, the day of assembly. Muslims pray five times a day, but on Fridays, they come together at noon for a sermon as well.

Many people were arriving for prayers as we visited. It is understandable that they would want to live near their mosque. Zafar said 40% of the people living in its Peace or Ahmadiyya Village nearby were non Muslim. About 40% of the students at the local public school were also non-Muslim. The mosque hosts many inter-faith seminars. They are not as isolated as I expected.

From there we walked past the spacious houses of the village along streets with names like Mosque Gate and Ahmadiyya Avenue. Zafar answered our questions about hijabs and creeds. Zafar said we could worship in the mosque. Some day I hope to go back to do just that.