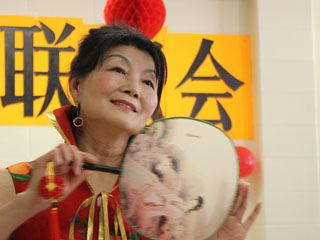 It was like being in China. My friend Romaine Jones and I got the VIP treatment the moment we walked in the door. Grabbed by the arm, we were hustled to the front of the room to the best seats. Bags of edible goodies were put in our hands.

We were at a Chinese seniors’ New Years’ celebration. No one spoke more than a few words of English, and the seniors, bless them, were obviously delighted to have some outsiders visit their much-anticipated yearly event. They even provided a translator for us. She spoke excellent English. They insisted on introducing us to the group and we each gave a little speech. At the end they included us in the final song and the group picture. 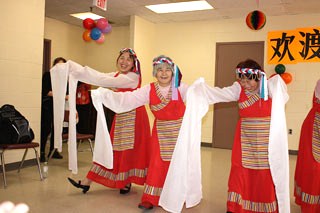 In China, you see seniors dancing in parks from 6am to 8am every morning. They have seniors clubs there, too. We were at one of several Chinese seniors’ clubs in Toronto. This one has about a hundred members meeting a few times a week at the Oriole Community Centre in North York. They play mah jong, learn English, make handicrafts, and prepare for celebrations. 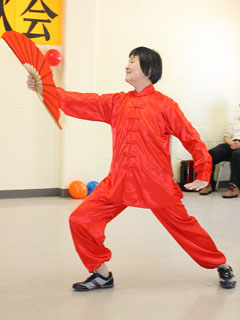 And what a celebration it was. Everybody was having fun. For two hours we watched a seamless succession of delightful dancers, singers with bunny hats, and a gal who twirled spools like they do in Chinese acrobatic shows. They put on a fashion show of “qi pao,” the elegant, narrow Chinese dress with the high slits up the leg. It was done with much grace and panache. One group did Mongolian and Tibetan dances. Another demonstrated taiji.

The songs were all in Chinese. They were mainly folk songs, but one man jumped out of the pages of recent Chinese history and sang all five or six verses of “Moscow Nights.” I could hear the audience singing too. They were young when China was first friends with Russia. I felt the nostalgia too. 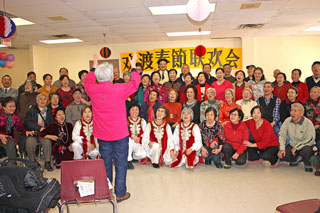 One of the highlights was a couple dressed in black doing a fancy ballroom dance. I thought they might be from Shanghai, because that’s where I’ve seen that kind of dancing. But they were from Guangzhou, and very classy.

It was the atmosphere there that was so special, and we felt happy to be part of a real community. Everybody knew everybody else. Some had brought their grandchildren.

I must admit that we arrived with an introduction. The daughter of one of the leaders is a friend of mine. I don’t know what would happen if you just arrived unannounced, but I suspect you would be effusively welcomed too. There’s another seniors’ event there in June.  Let me know if you want to go.