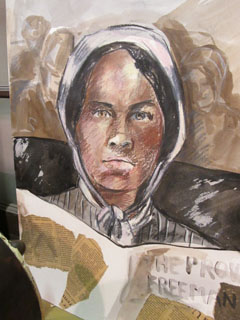 It would be a stretch to consider our visit to the historic old Mackenzie House a Black History event as advertised. We spent about 98% of the time viewing the house which didn’t seem to have a Black History component. I’m not complaining. Learning about William Lyon Mackenzie, the first mayor of Toronto, was interesting. A member of our tour group said he noticed dishes rattling as our entertaining guide Kate told us ghost stories.

The visit taught us a lot about Toronto history and printing presses in Mackenzie’s times. He published a newspaper, the Colonial Advocate. He led the unsuccessful Upper Canada Rebellion in 1837 aimed at separating Canada from England. He died in the Mackenzie House. We wondered if his ghost was rattling the dishes. 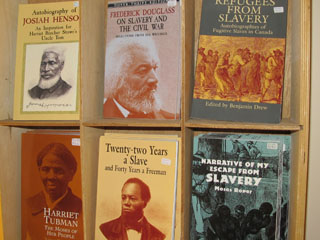 His printing press was the tie to Black History. It is in an addition to the house and guide Alex shows visitors how to use it. He told us about Mary Ann Shadd Cary. She was the first black publisher in Toronto and she used such a press. Her father was a free-born Black and she arrived in Windsor in 1851 from Delaware. A teacher, she opened a school for Black children. She then moved to Toronto where she and Samuel Ringgold Ward, a former slave, started a newspaper, the Provincial Freeman. It fought for the abolition of slavery, the immigration of Blacks to Canada, education, temperance, moral reform, and civil rights.

Mackenzie House did have a picture said to be of Mary Ann Shadd. It also had a selection of books on Black History. It gave us two pamphlets on Black History produced by the City of Toronto, one of which is a walking tour east of Yonge Street from Front Street to Gould. It shows the location of Mary Ann Shadd’s print shop and office on King Street West. We must look for it some day.