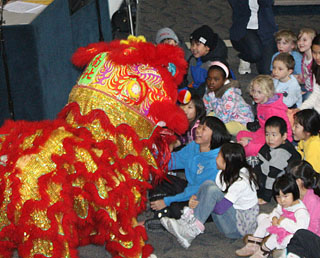 The lion dance was spectacular. The red and yellow “animal” reared up almost two meters to grab the offered lettuce in its mouth. It chewed and then spat it out. You are especially lucky if the pieces fall on you, said Valerie Mah, MC at the Chinese New Years event.

Then the lion advanced within centimetres of the delighted children seated in front of the stage. It wiggled its ears and wagged its tail. As usual, it was a friendly, vegetarian lion.

The human dancers came next. Most were young. The youngest appeared to be about three years old. The themes were mainly traditional Chinese, but of course there were cute bunny costumes in honour of the Year of the Rabbit. There was also a Parisian can-can.

The Chi Ping dancers have become an annual New Year’s fixture in the Scarborough Town Centre for several years now. They drew a large crowd this past weekend, mainly of parents, seniors, politicians, and friends. I guessed there must have been about 400 people there.

Basically this event had the feeling of a dance recital with New Year characteristics. Besides the dancing lion, there were a couple of games of chance and a martial arts demonstration. The God of Wealth gave out red good-luck envelopes to everyone in the audience. Inside each one was a chocolate loonie from the TD Bank.

This troupe, which was founded in 1984, has performed in China and Mexico. Its website is: www.cpdgculturalarts.org. You might want to think about this event for the 2012 Chinese New Year.