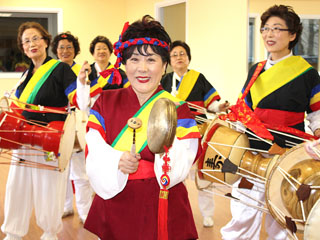 It was early in February when I had the time to look for festivals from Korea and Vietnam. They and several other countries share the same dates as China for their traditional New Year. I had written a lot about the Chinese. I wanted to include something about the others.

The Vietnamese had already observed Tet, which is what they call their New Year.

The Web took me to the Korean-Canadian Cultural Center where Micah Adler, its executive director, told me about its New Year party on February 19. (See Blog 70 below.) 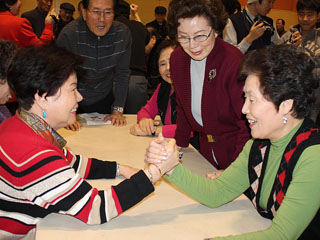 When that day came, I met some young women in the lobby handing out booklets at the door. They were from the Yes Project, an organization trying to encourage young Koreans to interact with their Korean elders. The traditional Korean social structure had changed. There was a need to work for mutual respect. The Yes Project is arranging day trips for the seniors and youths to go together to museums, parks, Harbourfront, etc. Do you have other ideas on how to solve this problem?

Its interesting brochure was in English, aimed at the young people. I asked for a program schedule for the New Year event. It was entirely in Korean. Aside from bulgogi and kalbi, I know no Korean at all.

Micah showed up and explained the schedule in English. He told me about the drummers, dancers, and taekwondo to come. I wandered around the large auditorium. The people there were mainly seniors and the families of the performers. A few people were playing a shuffle-board-like game. Then several seniors – both men and women — arm wrestled. It was a lot of fun and we all laughed.

I found the drummers while they were still practicing in a separate room. They were amazing. They ranged in age from about 60 to 80 and they didn’t seem tired in spite of the strenuous activity. Some of them spoke English. Others smiled and patted me on the arm. Their drumming was good and varied. Their costumes Korean. If I were planning a multicultural variety show, I’d include them. They asked me to take their group picture. 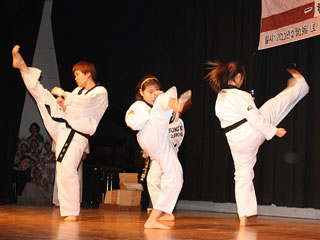 The dancers were about eight years old, all cute little girls dressed in tutus. The martial artists were impressive. The stage ended up full of broken wooden boards after the white-clad young people smashed them with their flying feet.

I wondered if the seniors were making a statement when they got up on their feet for what I thought was the Korean national anthem. Hardly anyone stood for the Canadian one.

The Korean-Canadian Cultural Centre is trying hard to get Korean young people interested in the traditional culture of their country of origin. Is it a losing battle? This is a problem other cultures also have in Canada and in their home countries. Do you have any opinions on how to solve that problem too? Should it be solved?