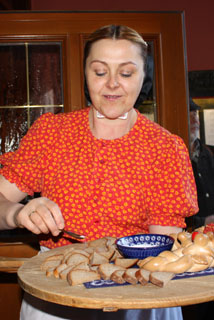 Late last year I was in Germany at a conference. About forty  North Americans chose to visit a Sorbian area instead of beautiful Dresden. Germany has at least 10 different ethnic minorities. The Sorbian minority is small, only an estimated 40,000 to 60,000, and dwindling. I went on the Sorbian tour because Germany as a multicultural tourist destination was a new idea.

The one-day Sorbian tour went to an area west of Dresden. The Sorbian language is Slavonic. Sorb speakers can understand Slavs in the neighbouring countries of Poland and the Czech republic. 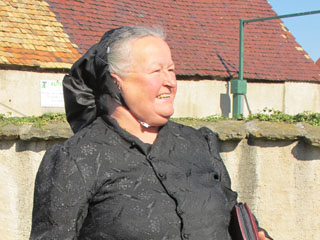 We went to a beautiful Catholic convent and a unique Sorbian cemetery, its white crosses lined up military style with graves set neatly in chronological order of death. There we came across a lady who daily wore the distinctive long Sorbian dress with a long-tailed bonnet.

We visited the town of Bauzhen where street signs are in German and Sorb. Sounds like Toronto, eh?  We heard about the schools where lessons are taught in Sorb. The government funds agencies that help Sorbs maintain their identity, their daily newspaper, radio station, library, and their theatre. This theatre is the only bi-lingual theatre in the country, our guide said. We would have seen the Sorbian museum but it was closed that day.

The University of Leipzig, also in East Germany, even has a small institute studying Sorbian language and science.

We tourists dined and danced at a Sorbian restaurant where the proprietor greeted us at the door with traditional salt and bread. Waitresses served us wearing the same type of dress that the elderly woman at the cemetery was wearing. They were the only people we saw in the unique costume.

I returned home wondering how we can market Toronto’s multiculturalism as a tourist attraction. If Germany can make such an interesting tour, why can’t we? Do you have any ideas?

I only know of one travel agency that gives regular tours to an ethnic area in Toronto. But what of our other groups? There seems to be an interest.