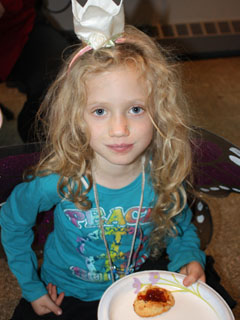 The art of oral storytelling is not dead. I could hear it even before I opened the door to the room at the Jewish Community Centre. There were cheers for the hero and boos for the villain as Eden Nameri recounted the story of Queen Esther of ancient Persia. A Jew, this queen successfully saved the Jews there from extermination.

Eden’s enthusiasm was delightful. The story was central to the Purim celebration of the Shir Libeynu Jewish congregation. Hopefully you’ll be able to hear this tale in the same entertaining way at next year’s celebration.

I seemed to be the only Gentile in a room of about 75 people, but it didn’t matter. People were friendly. Several asked if it was my first visit to their congregation. They were helpful as we headed for the buffet lunch of bagels, cream cheese, herring, and hummus. There was also the triangular pastry that symbolized the villain Haman. It was unexpectedly tasty. 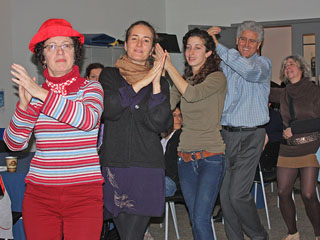 The notice for the celebration had encouraged attendees to wear costumes. This is part of the Purim tradition. A couple of women wore clown noses. One young man fashioned a costume out of newspapers. Little girls wore fairy, bear, and butterfly costumes. The costumes added to the festive occasion.

Yoram Rostas, who led the line dances, invited me to take part in those too. It looked like a lot of fun, but alas I had to leave early. I very much enjoyed this event, learned some interesting Old Testament history, and met some very nice people. I hope you will join one of their meetings some time too.