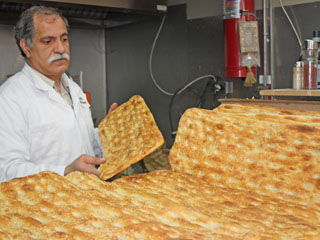 The Tibetan New Year was not the last 2011 New Year event in Toronto. The Iranian or Persian New Year (Nowruz) is coming up on March 20. It’s the first day of spring. Isn’t Toronto wonderful with so many great reasons to party!  Almost three months of New Year’s events! Are there any we’ve missed?

So how can we celebrate? Let me name the ways. The only completely free event I’ve found  is the Queen Gallery website: http://payvand.com/blog/1390/2011/03/01/toronto-norouz-2011-group-show/. It has a show by four Iranian artists all Toronto residents. Take a look at this web-site. Their work is stunning. Better still, visit the gallery at 382 Queen St. East (at Bathurst). E-mail: info@queengallery.ca. 416-361-6045.

The next cheapest way is to pick up some Iranian food on Yonge Street, especially the amazing bread. The freshest is at Zamani Meats at 6120 Yonge St. You can see it coming out of the oven. It’s almost 60 cm long. 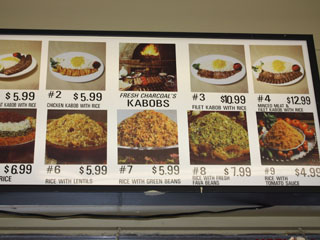 Across the street is what’s known as the Iranian Mall. There are a couple Iranian grocery stores there. My favourite is Food Market 24 though the staff is not particularly friendly. Its take-out is so nicely spiced, I would go clear across town to get some. You can point to the generous meat skewers and they will barbecue them up for you. The price includes rice and a tomato. You can currently buy imported New Year’s goodies there too, and all kinds of Iranian groceries.

At the south end of the mall is Pars Video store, where George is really friendly and knowledgeable. He says it’s the largest Iranian DVD store in North America. You probably know some famous Iranian directors. George says all Iranian directors are famous, but he easily found one whose plot I described. I saw it at least 20 years ago. So my Iranian New Year’s present to myself was four DVDs, each less than $4. It included a DVD for children on Norooz in cartoon form. All have subtitles. 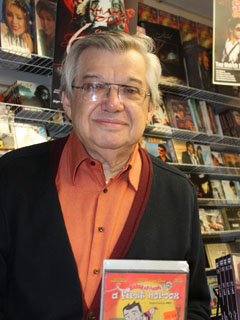 The staff at the B.B. Cafe nearby at 6095 Yonge Street was very helpful too. Their Iranian tea came with a candle to keep the pot warm. I’d recommend it too.

As for parties, the Iranian students associations at our local colleges and universities have probably organized their own. The only one I’ve heard of is a dinner-dance at the University of Waterloo on Friday, March 18.

There’s also the Amnesty International Action Circle celebration on March 24 at 6-9pm. It will have Iranian food, music, and guest speakers and remember the “grave human rights abuses undergoing in Iran.” It will be at 1992 Yonge Street, 3rd Floor, between the Eglinton and Davisville subway stations. Phone 416-363-9933, ext 333 or vicechair@aito.ca

For information on Iranian events around the world, click on: http://www.kodoom.com/en/ . It’s free too.