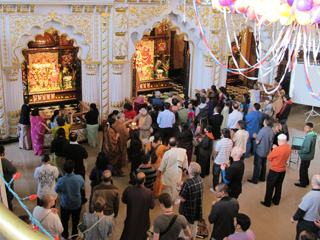 What is your impression of the Hare Krishna religion? I started hearing about it in the 1970s. Its followers were passing out leaflets at Toronto’s airport. They were strange people with shaved heads. They were white, but they were dressed in simple Indian style clothes and they were a nuisance.

When I lived in India, they were there too. They acted differently from other Hindus and looked out of place with their western features. We wondered what Indians thought of them. But when we lived in Kazakhstan, theirs was the only decent restaurant. If we wanted to eat out, that’s where we went. It was cheap. The food was good. No one pushed us to join their religion.

Back in Toronto in the 1980s, we noticed that Hare Krishna had taken over a big church at the corner of Davenport and Avenue Road. They had an annual parade down Yonge Street to Toronto Island but I never saw it. When I was researching multicultural Toronto, an Indian friend said it was a real Hindu group. Indian people belonged to it too. She suggested I visit the former church for the Holi festival.

We remembered the Holi festival from our India days. People throw coloured powder and water at each other as part of the ritual and fun. But no such thing happened at the Hare Krishna festival last week. Unlike other Hindu festivals we’ve been to recently in Toronto, the Hare Krishna’s festival was more a group affair than a place for individual acts of worship. The congregation of at least two hundred sang, clapped and danced together. They were livelier and noisier. There were a lot of non-Indians, many of them leading the chants, performing in the skits, and drumming. All of the women were in Indian dress. Most of the people there however looked Indian.

I didn’t feel out of place. The service was 2 1/2 hours long and it was mainly in English. As in India, almost everyone sat on the floor. I can’t sit on a floor comfortably, and had to stand. No one seemed to notice or care. I went up to the balcony to take pictures. Hardly anyone was there, and there were places to sit. I preferred being downstairs with the worshippers. They answered my questions.  One man was carrying around a tray of burning candles so we could purify ourselves with the smoke, I guessed. No one objected when I didn’t get down on my knees and put my forehead to the floor. No one objected when I didn’t bring an offering of milk, fruit, or flowers.

The atmosphere was friendly. Many people were taking pictures throughout the service, especially of the statues of Krishna. The music was catchy. Early on, one of the leaders asked if newcomers were present and welcomed us. No one asked for money or tried to convert me. The banquet at the end was worth waiting for. The vegetarian food was hardly spicy at all by Indian standards.

We had to scramble to put our shoes back on at the door when it came time to leave, but I was sorry it was over. It had been an enlightening experience. I would highly recommend it if you want to see and try to understand what some other Torontonians are doing.