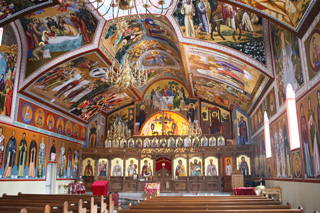 Do you know any other world class artists who live here? For me, they are one of the most exciting aspects of multicultural Toronto. Lorraine Williams told us about the Macedonian Orthodox Church in Markham. She said its recently-painted interior was stunning and she arranged a visit for us.

Lorraine was right. After we entered the church under the flags of Canada and Macedonia, a gallery of amazing murals greeted us. It looked as if every centimetre of wall was painted in Byzantine style. Scenes from the life of Jesus, of the Virgin Mary, and portraits of the saints, angels, and church leaders filled the church, and even the inside of the cupola. The colours were bright with newness and decorated with gold leaf. The saints wore haloes. 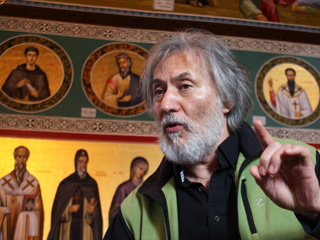 I imagine that the art in the ancient churches of Istanbul, Athens, or St. Petersburg must have had the same vivid colours when they were first painted too.

We had walked through a looking glass into Eastern Europe, into Macedonia, a country none of us knew much about up until now — for its art. I have since learned that Macedonia was central to Byzantine art centuries ago. If you want to see the old stuff, the University of Toronto and the ROM have collections. At this church, the art is alive because it is related to the faith of the people who worship there, and of course to the artist, Georgi Danevski. 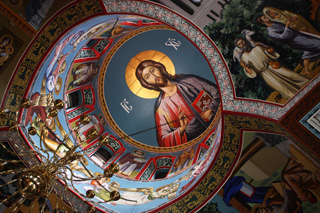 Priest Father Constantine introduced us to Danevski, the creator of this explosion of paintings. It was an unexpected privilege. Danevski has spent the last five years working on scaffolds here. I kept thinking of Michaelangelo and the Sistine Chapel as he talked. Danevski finished this masterpiece late last year. Before that, he worked on St. Clements of Ohrid Macedonian Orthodox Cathedral (76 Overlea Blvd. Tel. 416-421-7451). He has also painted churches in Macedonia.

Danevski described the details of his rendering of the Assumption of Mary, and the Flight into Egypt with enthusiasm and passion. He explained how his own style, his own creativity, influenced this art form with its famous symbolism. He talked of his love of Rembrandt and horses. He can paint in naturalistic styles too. 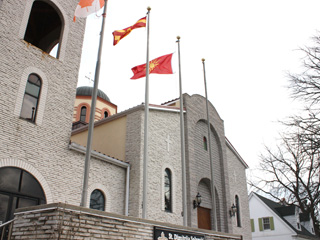 He was charming. It was obvious he enjoyed talking with people. He arranged tea and coffee for us. Georgi said he was happy to meet with large groups, though I suspect he is busy. His biographer, Shelley Richardson, said he is “currently exploring a new synthesis between light, colour and line in the human form through ballet figures from the National Ballet, Royal Ballet, Kirov etc. ..

“Mayor Scarpitti (of Markham) is a great supporter of Georgi’s work at St. Dimitrijus and has plans for an official celebration of the mural’s completion alongside an exhibition of his canvas work,” she wrote.

Omni 1 television recently made a one-hour documentary about him called “Georgi Danevski: Confessions of the Heart.” His web-site is: http://danevski.com/. His telephone number is: 647 887 5470.

But if you just want to see the murals, St Dimitrija Solunski Macedonian Orthodox Church is at 201 Main Street North, Markham. Tel. 905-471-5555. It is across the road from the Markham Go Station. A map is at http://bit.ly/gL29rU . Telephone first to find out when the building is open.