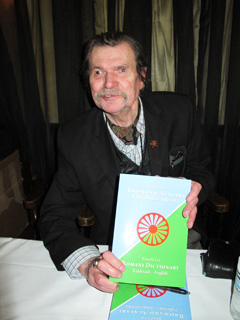 This past week on International Roma Day, I was at a fund raiser for a Roma Community Centre in Parkdale. By the time I left two hours later, I had a different image of these much maligned people known to those who don’t know better as Gypsies.

Okay, so there was a lot of schmaltzy music and people did get up to dance to it. But the first person I talked to was Romani artist Lynn Hutchinson who has just published five of her poems. One of them was about a Romani family leaving a country where people threw stones at them and going to Canada, a country “without shadows.”

The poems were in a new 24-page booklet that she edited. It’s called Canada Without Shadows – I am a Romani Woman. It was being launched at the event as part of a larger project to be exhibited in Europe. It contains stories by five Romani women who recently arrived here from Hungary and how their lives have changed for the better. Their children could go to school without fear. They are hoping to stay in Canada. 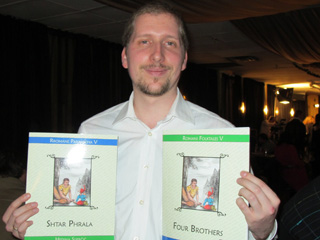 I talked with Ronald Lee who was also born in Canada. His family arrived in Montreal before World War II. They did experience discrimination, but it was not like Europe. “If anything was stolen in their school class room, the Romani kids were the first to be suspected,” he said.

He was launching his English-Romani and Romani-English dictionaries, monumental life-time works. This former U. of Toronto lecturer on Romani studies said educated Roma around the world know English. He expects his dictionary to sell better outside of Canada. His publisher has now also republished Lee’s autobiographic novel with its original title The Living Fire. It was first published 30 years ago with the title Goddam Gypsy. These three books are available on Amazon.com. His web-site is www.kopachi.com.

The wife of the Hungarian ambassador to Canada spoke. There are 20 million Roma in the world, she said. A couple of local politicians, Cheri DiNovo and Peggy Nash, welcomed the Romani people to “our family.”

Roland Honsch was eager to talk too. He is the publisher of Ronald Lee’s three books. His Magoria Books specializes in Romani authors and books about the Roma. He was born in Hungary and came to Canada in 1994 as a child. Magoria will have 16 or 17 books on his list by the end of this year. These include six Romani folk tales in both English and Romani for children. His website is: www.MagoriaBooks.com.

The terms Roma and Romani are confusing and misused. I hope I got them right. Mr. Lee explained that the word “Roma” is plural, and “Romani” is an adjective.

This event is not in my usual free or nearly free category. I have included it because other Torontonians might be interested in meeting these people, about whom we know so little. There are only about 6000 Roma in the city said one source on the Web. Getting a different perspective of this cultural group was worth $20 to me. I expect the money will help their community centre too. See also: http://www.romatoronto.org/ , www.rcctoronto.org and http://www.nrado.com/ .