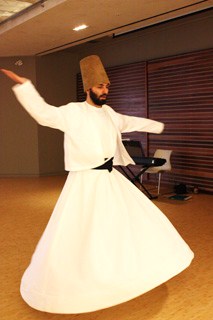 The notice on NOWToronto.com web-site of events said this was a seminar about Whirling Dervishes and ancient temple dancing. I had seen whirling dervishes in a show for tourists in Egypt.  I thought they were just dancers who twirled in circles for about 10 minutes and didn’t seem to get dizzy. They wore skirts and a strange hat. How and why did they dance this way?  Here in Toronto last week was an opportunity to find out.

When I arrived at the U. of T., a sign read “Sufi Yoga.” I had been introduced to Sufism in comparative religion classes in college as a mystical branch of  Islam. It sounded like mystical Christianity and I wanted to learn more about it then. The combination of “Sufi” and “Yoga” here seemed like an alliance of Islam with Hinduism.

My curiosity got the better of me.  I paid up. Later one of the regular students of this series of seminars said sometimes students were admitted free.

I did learn about dervishes that day and more than I wanted to know about sufi yoga and the teachings of G.I. Gurdjieff, J.G. Bennett,  and Fourth Way Sufism. I was more interested in the dances, and talking with the dervishes. The word is from ancient Persia.  Dervishes were originally Muslim ascetics. 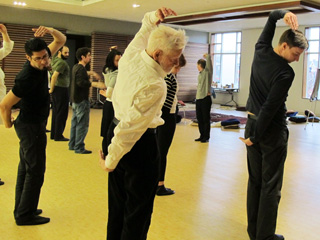 Teacher Paul Rockman first led us 20 or so students through a simple series of arm movements to delightful Middle Eastern music. “The gestures will eventually explain themselves” he said. Strict adherence to a preordained order seemed very important.  He taught us how to twirl around and around with the front of the  right calf  rubbing the back of  the left.

Then four of the students in white dervish dress danced.   It is a spiritual exercise, not an entertainment, said Paul.  We others joined hands and started to dance around one of the dervishes as he closed his eyes and crossed his arms over his chest.  We were told to project energy to him and to chant in Arabic “Lord have mercy. There is no God but God.” Then he started to turn.  He must have twirled for 10 minutes and he didn’t appear dizzy. 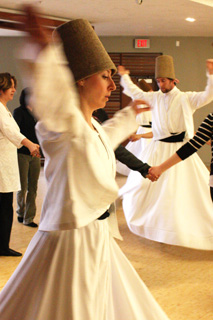 “I do it by sensing my body and doing the zikr in the heart,” said one dervish afterward. A zikr is an invocation. “My eyes are open. I keep looking at my left hand.”

The white costume is a symbol of rebirth.  The hat is a tomb stone, symbolic of the death of the ego. “The aim,” he said, “is conscious development. It opens the heart. I do it because it beats watching television.”

“By turning, we try to find our centre, to feel more alive, and to experience states you haven’t felt before,” said Paul.

The literature given with the seminar says “… With the Turn, one becomes totally free of oneself and the world…  In meditation one becomes easily distracted, whereas with Turning, this can never be so.”

It was indeed a deep, religious experience I never expected in Toronto.  If you want more information on classes, contact perceptionhouse@bell.net or telephone 416-533-3505.