109. Easter Eggs Around the World 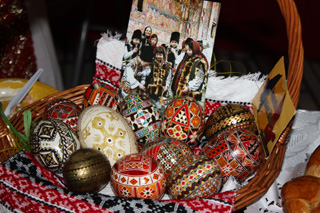 Politicians intent on getting the ethnic vote should have been there. With many different folk costumes, it was an easy photo opportunity as representatives of twelve cultures displayed their Easter customs in the City Hall Rotunda last Sunday.

Politicians could have posed with some amazing Easter eggs too. Most of the countries showed off their unique eggs.

Decorating eggs is an art. At the Easter Around the World festival, I discovered that the Ukraine, Romania, Poland, Slovak Republic, Hungary, and Macedonia have awesome eggs. The Portuguese have lovely speckled eggs in pastel colours. Some of theirs are fitted with ribbons, ready to be hung on trees. The Slovaks have attached ribbons too. 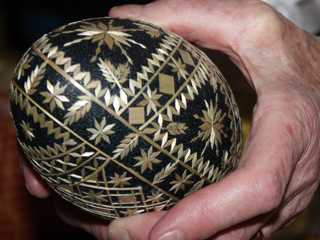 From the Serbian tradition came lovely brown eggs dyed with the natural stain of water resulting from boiling onions. The designs are  stenciled with real leaves or flowers held in place with nylon stockings.

The Ukrainians also exhibited a black emu egg embellished with straw.  Mary Kampu from the Slovak Republic showed an egg with a Canadian flag that she had made to commemorate her husband’s arrival in Canada. Her egg was several decades old and still in good condition.

A couple of white-haired women demonstrated how their eggs were tinted. Many countries use the same technique. First you dip the egg into food colouring. After it dries, you put the first of several designs on the egg with heated beeswax. Then you dip the egg into another colour and let it dry. Thirdly, you paint another design onto the egg with beeswax and repeat the process until you have all the colours you want. It is a long procedure if you want several different colours. I hope younger people are learning the art too.

There were eggs painted with acrylic and eggs made of wood or chocolate too. 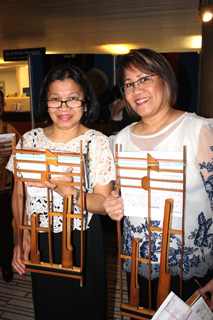 Aside from the eggs, cakes made in the shape of lambs and chickens were for sale. I was pleased to see one spectator loading up on Romanian food because she had never eaten anything Romanian before. The Portuguese had the largest display of Christian pictures and symbols. The Dutch hardly had any. Their country showed off its cheese, chocolate, cookies, and porcelain. I wondered if the Portuguese were the most religious.

A Polish choir sang. A Filipino band shook their serene-sounding angklungs. They are musical instruments made of bamboo in different sizes. The rotunda was full of beautiful costumes. Politicians should have been there.