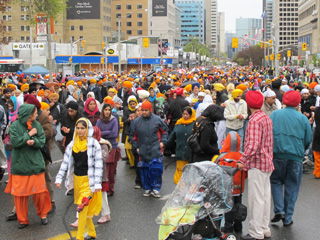 I’ve attended Khalsa Day celebrations twice before. I expect to be there a third time next week, April 24, Easter Sunday. The sight of about 50,000 Sikh men, women and children walking north on University Avenue blows my mind. The Sikhs are there to honour their heritage, the ties to their culture. I am happy that they can do this. I am delighted they bring their children and their babies. It tells me what a wonderful, inclusive city Toronto is. I love it.

It disturbs me that there are so few non-Sikhs watching. On Sundays, University Avenue is almost deserted anyway, but for other parades there are people lining the streets and occasionally applauding. 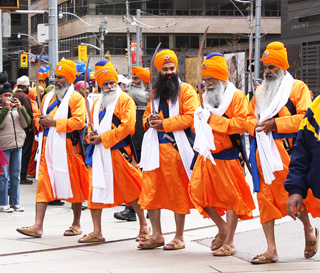 In the past, the lack of spectators was because very few people knew about the parade. It hasn’t been advertised much. Last year many people learned about the parade after the fact. There had been some violence in one of the Sikh temples during the month before. So policemen and media showed up at the parade in droves, just in case. The event ended up on the front pages of Toronto newspapers even though there was no violence. It was an unplanned public relations coup.

So this year? Well it’s Easter too. Families will be at the parade in the Beach and having family parties. They’ll be doing their Easter thing. 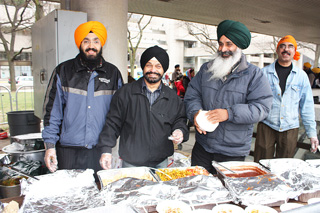 I hope a lot of people will be watching the parade this year. It should arrive on University Avenue from the south about 1:30pm with everyone at Queen’s Park by about 3pm. Warriors in ancient costumes and floats about Canadian-Sikh history will be there. A very special float will carry the holy book of the Sikhs and people will be reaching out to touch it and be blessed by it.

At Queen’s Park, there will be political speeches – but you can ignore those if you want. But do stay for the famous Sikh hospitality. It’s not just for Khalsa Day. The Sikhs offer wonderful vegetarian food to everybody who visits their temples too. The food is genuinely Indian and spicy hot. There will be rice pudding too, and for the children, macaroni and cheese. At least there was last year. 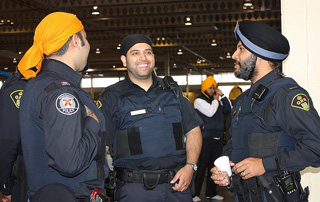 If the weather is good, people will be lingering. It’s a good opportunity to talk to them about their religion and the controversy in Canada about policemen wearing turbans and children carrying ceremonial daggers. Do they still feel strongly about supporting an independent Khalistan? If you haven’t already, it’s a good chance to make some Sikh friends.