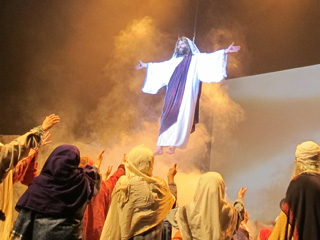 It was a lot more fun than I expected, but then, who expects a Passion Play to be “fun”? Did you see it?  Do you agree?

I also didn’t expect such a large crowd or a pastor with stand-up jokes, nor a cast of 200, nor such an interesting lesson in old Jewish customs, nor an excellent 15-member orchestra, nor such beautiful music, dancing and singing, nor such a well-crafted story.

I had never heard of the existence of a Passion Play in Toronto until I read about it in a list of Easter events on the Web. I was curious. It was close to my home, in Etobicoke, and there were seven, yes seven performances this Easter. What was the attraction? 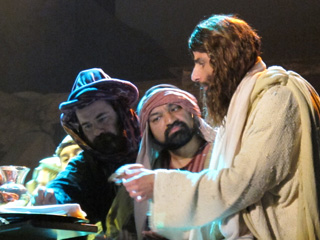 Later I learned that the auditorium where it was held had a capacity of 3200 people. The day I went, it was almost full. Many children were in the ethnically diverse audience and they seemed to enjoy it.

I had expected some kind of direct religious message; after all, the event was free for those who sat in the balcony. It was only $5 for the reserved seats and the parking was free. There had to be a catch. The play of course covered the life of Jesus from his baptism to his death and resurrection. The multiracial cast was largely composed of members of this huge Pentacostal congregation. 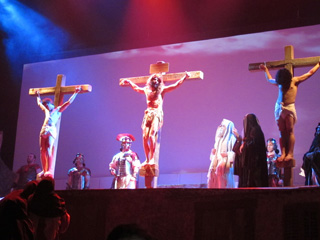 The church’s  promotion came after the gruesome crucifixion scene with Jesus and the two thieves actually tied to crosses. Paster Billy Richards called on people in the audience to commit themselves at that moment to “let Jesus into their lives.”  Over a hundred people responded while Amazing Grace played over and over. He also asked for additional donations.

Aside from the  religious appeal, Pastor Richards was otherwise very funny. Even during his request for more funds, he kept cracking jokes. One was about the church’s coffee cups, which were on sale. They are guaranteed to turn water into coffee, he said. 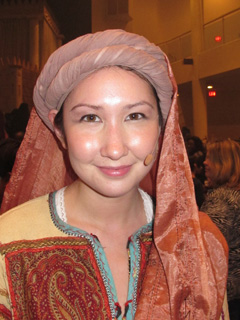 During the play, the narrator, the high priest Annas, was very humourous at times and multi-dimensional. He kept losing his battle of control over his wife. Annas was the one who explained the old Jewish customs and history. Toronto playwright Alicia Des Marteau portrayed him in a sympathetic way.

In the printed program, she wrote that she hoped the production “will be a blessing to the Jewish people to whom we Christians are so deeply indebted… We are only too painfully aware of the sad role the Passion story has played in Christian persecution of the Jewish people for centuries…”

This church has been putting on a passion play for the last 20 years. It is too late to see it this year but do mark it on your calendar for next year. See for yourself what the appeal is. For more information, visit www.TorontoPassionPlay.com.