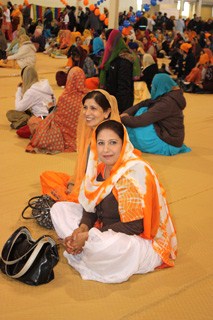 It was a glorious day last Sunday. Unlike Khalsa Day last year, the sun came out bright and warm. The sun and the parade cheered up the drabness of University Avenue, still brown from winter. If only the Sikhs in their brilliant yellow and orange turbans, and gold, pink, or red salwar kameez outfits, could bring such colour to downtown Toronto every day!

The organizers of the CNE and parade events of Khalsa Day are to be congratulated for a job well done. I was at the Better Living Centre that morning and everything seemed to go like clockwork. One area inside was well marked like a car park with letters. It was easy to remember where you left your shoes. At another area, worshippers could line up to bow to their god and give a donation for the festival. There they could sit and listen to prayers and sacred music while they waited for the parade to start. Khalsa Day celebrates the founding of the Sikh religion in 1699.

The feeding of thousands of people in the same building was amazing. One queue was for snacks. A second queue gave people a plate, spoon and cup. Volunteers ushered them to recently-vacated rows of soft pads, where they could sit on the floor and be served with food. Other volunteers cruised non-stop along the rows, dishing out steaming lentils, spinach, chick peas, chapatis, yogurt, and rice pudding. For those of us who love Indian food, it was heaven. 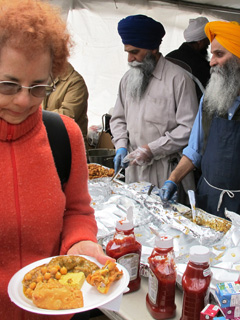 Outside, still more volunteers cooked more food in huge vats, but interrupted their work to pose for my camera. Floats started to line up and the faithful reached out to touch a glass-covered vehicle that held the holy book. The touch gave them a blessing, they said.

I arrived an hour early at Queen’s Park, the 3:30pm destination of the parade. Thousands of Sikhs were already streaming into the park. Volunteers were ready to dish out more Indian food and chai, tea flavoured with spices. Knowing that the lines would be insurmountable once the parade arrived, I urged my friend Romaine to eat before they came. It took no coaxing.

The median at College and University is my favourite parade site. You can see down University Avenue and there’s a place you can stand to get above the crowd for good camera shots. To the east, I could see Immigration Minister Jason Kenney handing out Canadian flags to everybody within reach. To the south I could watch the approaching parade and the police skillfully stopping the marchers to let street cars go by. 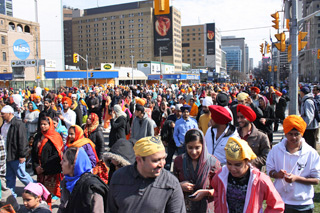 The parade was beautiful – men, women and children out on a Sunday stroll, many with baby carriages – about 50 abreast. Men talked on cell phones as they walked. A handful dressed in white tunics and blue leggings demonstrated their sword-fighting skills.  None of the people I spoke with said they supported the controversial, independent Khalistan. “We’re here because of our culture. We don’t care about politics,” several said. A big red truck cruised by with a sign that proclaimed, “Sikh Values are Canadian Values.”

At the end came a garbage truck with the remains of the CNE banquet. Cleaning up their own mess at the CNE was apparently a Sikh value.  Along with feeding the hungry, it is an exemplary one.

Inside Queen’s Park, politicians Jack Layton and Michael Ignatieff spoke to the immense crowd. We couldn’t wade through the people to listen so we headed home past the lines of waiting buses on the east side of Queen’s Park. We walked slowly, not wanting to break the spell of a beautiful day, sorry only that so few other non-Sikhs were enjoying the experience.

If you missed this parade, there’s another smaller Khalsa Parade in Malton next week.