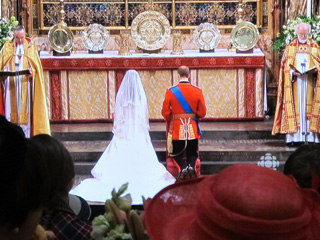 I had expected a lot of people but only 60 were there when I arrived at 6:40am. There was no clotted cream with the scones, and no impeccable waiters. We had to get our own tea in paper cups no less, but the Royal Wedding party was lovely and free of charge. It was in the lobby of the Canadian Broadcasting Corporation on Wellington Street.

Not many people spoke to each other. We were all engrossed in watching the proceedings on one of three television screens, but a nice atmosphere pervaded. Some early arrivals were lounging in comfortable sofas. The rest of us sat around little tables or stood. We were all sharing the magnificent pomp and circumstance of a traditional slice of royal British culture. 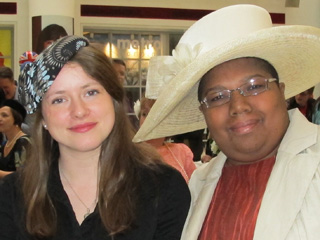 Here was the wedding of a handsome couple, splendid fairy-tale carriages, matching horses, impressive cathedral architecture, and boys’ choir. We got glimpses of a family and celebrities we know by name. We all even stood up for the formal playing of God Save the Queen, performed thousands of miles away, in London’s Westminster Abbey.

Were we all wondering if terrorists would spoil it all?

The public invitation said that “prizes will be awarded for the best hat, wedding dress, or bridesmaid dress.” Only a half dozen women showed up wearing fancy bonnets. They were not as fancy as those in London, but hats, nonetheless. The M.C. asked these people a few questions like “What was the date of the engagement?” and “What were the couple studying when they met?” She gave the women and one man in a suit with the correct answers each a prize. These were like a gift certificate for English tea at the Windsor Arms or a $100 spa treatment.

Kristine Maitland, in a striking beige bonnet, said her Guyanese mother knows more than she does about the Royals. “I’ll sit with her and watch the shows about the royal family. She can name all the Royals even before Henry the Eighth.”

Beth Bussus was there because she’s an eighth generation Canadian. We have very little ceremony and the British do.  I was there because royal visits and British tradition are part of my own Canadian past.  I guess it was the nostalgia.

While several Toronto restaurants celebrated the occasion with royal breakfasts and teas, the CBC event was very affordable. It was worth getting up early and going downtown for.