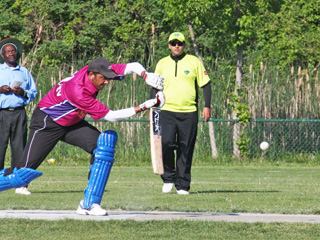 Toronto does have cricket and lots of it. It’s a multicultural opportunity and it has female teams too. There’s no fee for watching a game.

The season goes from May 7 to the mid-September playoffs. The Toronto District Cricket Association (TDCA) claims to be the largest cricket league in North America. The first cricket club started in Toronto in 1827.

This year, the TDCA has a total of 63 clubs and 151 active teams with over 5000 registered players. Last year it had its first ladies’ team. It was the only female team to compete in the Men’s 4th div competition. This year the women will have their own all-ladies division with six to eight teams. 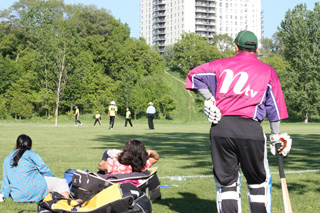 “We are always looking for more players,” says its Correspondence Secretary Tapinder Singh who is happy to answer questions.

He also says, “Teams generally tend to group around a bunch of friends getting together to play. If they happen to be all from one country, it is a matter of natural coincidence.  The association has “quite a mixture of local Canadian-born players as well as players born in other cricket-playing nations like India, Pakistan, West Indies, Sri Lanka, Australia, and England.”

Cricket grounds are at places like Sunnybrook Park (Leslie and Eglinton), Eglinton Flats (Jane and Eglinton), and Ross Lord Park (Dufferin and Finch). “Our best ground for watching our Elite and Premier divisions play is the Maple Leaf Cricket Club in King City at Dufferin and Bloomington Side Road in King City… There are a total of five cricket grounds at this facility,” Singh says. “The finals are held there.” Game time is typically from 12:30pm until 8pm.

I have lived in Toronto for several decades, but it wasn’t until I went to India that I saw my first cricket match. Last year, I just showed up on two weekend afternoons at Eglinton Flats. The first time, a handful of Indian wives were sitting with their children. They were watching their husbands play but they didn’t know much about the game. We had a pleasant time chatting and watching.

On the other occasion, a small group of players was waiting for its turn to play and they were happy to tell a newcomer about the game and the league. In fact, I got the impression they thought it funny that a woman was interested in learning. For me, the experience was a multicultural opportunity.  Are there any other sports with players from so many diverse backgrounds in Toronto?