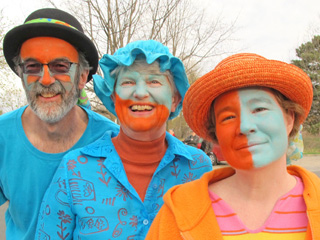 Bob Houghton and other Wolves at the Door. Image©Ruth Lor Malloy 2011

Did any of you get to the annual May Day Morris dances in High Park this past weekend? It was my third year. It’s become a tradition for me. I would probably miss this fix of energy and infectious humour if I didn’t go.

The dances are basically the same each year — high impact jumps, lots of skillful movements, and wonderful costumes.  The quality of the dances are good enough for a theatre, though they are folk dances and not meant for stage performances. I’m getting used to the same faces, earthy songs and music, although each year has brought something different. This time my friend Romaine Jones came too and her reaction of delight at the quality of the dances and the village atmosphere added to my own enjoyment. 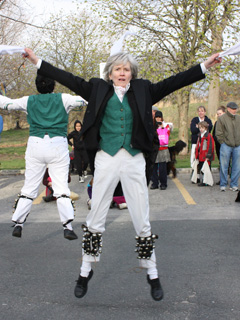 I was so pleased to see Kristine Maitland there. You might remember her picture from the Royal Wedding in Blog 121.

This year, we happened to meet Bob Houghton, his face painted orange and green. He dances with the Wolf at the Door troupe and is based in Cambridge, the Cambridge in Ontario that is. Bob did a thesis on “Humour and Popular Culture in the Time of the Puritans.” He was able to correct my information about these dances. Though they are all called “Morris dances,” they are not all from the Cotswolds in Britain. At the High Park bash, dances were also from East Anglia, the Welsh border, and north England. 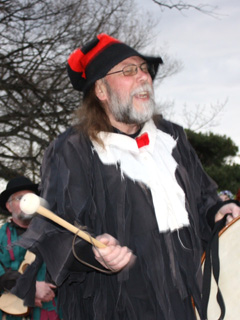 “The earliest reference to them is from the 14th century,” Houghton said. “They are an English adaptation of Moorish dances. Tudor King Henry the Eighth, the cad, later had Morris dancers in his court.

Maggie Thompson came around with a big ceramic frog. She was wearing a top hat and collecting donations. Otherwise the event was free. What were the donations for? Beer, she answered.

The event must have started at 6am. It was over by 7:45am. They’ll be performing again on Labour Day around the city. Keep tuned for times and places. It’s hard to get information. They don’t advertise.