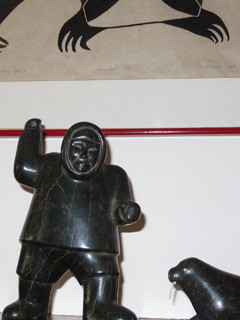 There are many things to do in Toronto on the Victoria Day holiday weekend. A couple of them are free and within the multicultural guidelines of this Blog. Please let me know if you’ve found others we can share.

On Monday, May 23, from 10am-6pm, the Museum of Inuit Art will not charge admission. It’s at Queens Quay Terminal at 207 Queens Quay West, the building to the east of Harbourfront (where lots of exciting events will be happening – but they won’t be ethnic). The Inuit museum is a chance to enjoy stone carvings made by natives of Canada’s Arctic region, a uniquely Canadian art form. There are prints also of the native religion and life style. For information,telephone 416-596-9821. For an illustrated preview, see: http://www.miamuseum.ca/.

The free Waterfront Bus Shuttle will operate between 10am and 7pm. It started May 21 and will continue seven days a week approximately every half hour until October 10. Keep this in mind also for future waterfront events too. It starts at Union Station (south entrance at Maple Leaf Square). It stops along Queens Quay West at the Radisson Admiral Hotel, Queen’s Quay Terminal (home of  the Inuit museum), Westin Harbour Castle, and Ontario Place. Visit www.waterfrontbia.com for more information.

For people new to Canada, Victoria Day is an official holiday marking the birthdays of Queen Victoria (born May 24, 1819) and Queen Elizabeth II, the current sovereign of Canada (who was actually born on April 21, 1926). The holiday is always on a Monday on or before May 24. This date signals the beginning of summer after which many locals believe there is no danger of frost. They can plant their gardens without fear. Many Torontonians take advantage of the three-day weekend to open their summer homes in “cottage country,” which have been closed for the winter. This is a Canadian tradition. Offices, banks, schools, and stores are closed.