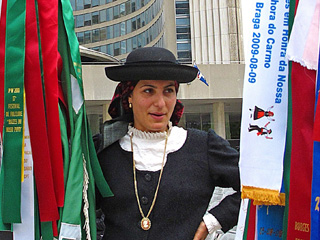 Yikes, I almost missed Portugal Week, which started June 2; however, there will be a festival on June 4 at Dufferin Mall. On June 10, there’s a flag-raising ceremony at Toronto City Hall. Last year, there were dance performances there. On the same day, there will be a proclamation of Portugal Week at Queen’s Park, and music at Trinity Bellwoods Park.

There’s also a huge parade on Saturday, June 11, on Dundas Street from Lansdowne Avenue to Trinity-Bellwoods Park. The parade and following program will have performances from many of Portugal’s provinces as well as singers direct from Portugal. This is an amazing parade which shouldn’t be missed if you want to see the rich cultures and colours that the Portuguese have brought to Toronto. Expect a humongous crowd of spectators. On June 12, there’s another folklore festival in Trinity Bellwoods Park – in case you missed the first one.

Annual picnics will be on June 19 and June 26, but I don’t know if there’s a charge. Everything else is probably free – except for any food.

Detailed schedules are on the web-site: http://www.portuguesealliance.com/portugal-week/.   What a wonderful opportunity to please your Portuguese friends and yourself by being at any of these events!