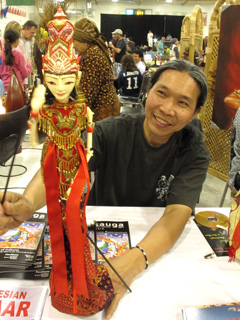 As a place to take pictures of as many countries as possible, it was great. An A+. In six hours, I was able to collect 11 countries, plus several more grouped as Hispanic and African. Where else can you easily find representatives of Cyprus and Iraq in Toronto? Where else would you find an artist making sand paintings in bottles the way artists make sand paintings in Egypt? 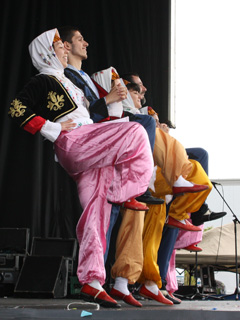 Would you consider it an African dance if the young women involved happened to be of African origin? What if one wore a tee-shirt that said “Our Boy Friend is Hot.” So maybe this is what a modern young African would wear in Africa today. But is it African culture? Who chooses the performers? The grade is a compromise.

I sat beside a lovely Turkish woman whose son was one of the excellent Anatolian dancers. We groaned together as yet another belly dancer appeared on stage. Belly dancing is only one tiny part of Middle Eastern dance. The men in the audience clearly disagreed with us.

On the other hand, I thoroughly enjoyed a group of women drumming in the African way even though three were white and two were black. I think it’s great that we appreciate each others’ cultures to the extent of learning them. Maybe I just have a problem with belly dancing. The B is because I can’t decide. I would appreciate your thoughts on this. 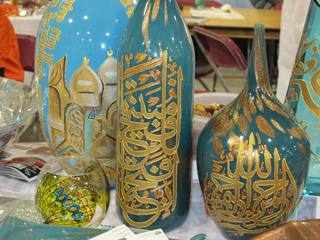 Meeting the Turkish woman was one of my Carassaga highlights. So was chatting with an Indonesian woman who told me about the gado-gado she was eating. There were lots of opportunities to talk with people of other cultures, especially while sharing tables. Merchants answered questions and were generally friendly. Only one, dressed in ancient Egyptian costume and working incongruously on a computer, refused to let me take his picture. 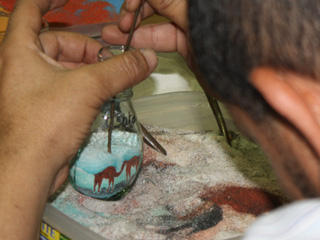 I can’t vouch for the quality of all the food there but the bland peanut sauce of the satay at an Indonesian stall was a disappointment. I give it an F. I tried the big simic, which is like a Turkish bagel. It was slightly sweeter than a bagel and covered with sesame seeds. I would recommend one if you’re hungry.

There was a lot of interesting ethnic foods and drinks to sample like soursop and lukuma drinks and Inca Kola from Peru. Though the Colombians offered a whole barbecued pig, the Peruvians fortunately didn’t offer their national dish which is guinea pig. 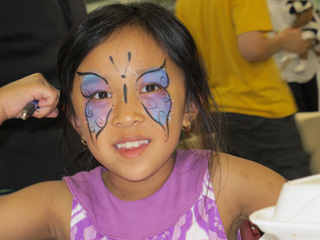 I did enjoy Carassauga. A Pakistani stall was selling cheap copies of William and Kate’s “wedding ring.” A gaggle of children were beating a drum and dancing along with the African women’s band. Some of the face-painting was very imaginative. Perfume bottles were lined up the way they are in many stores in Cairo. Cheerful volunteers collected donations for Heart and Stroke in the Canadian pavilion amid the poutine and beaver tails.

Best of all, the crowd was very multicultural. People were enjoying each other’s cultures.