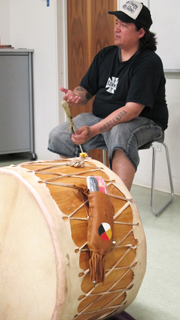 As a child, Ian Akiwenzie didn’t know anything about his unique cultural roots. One day, one of his teachers told his class that Ian was an “Indian.” Would he tell them about Indians? He has been learning and teaching ever since.

Ian grew up in Toronto. Earlier this week, he wasn’t wearing feathers and deer-skin but he was fascinating nevertheless. He was talking about his Ojibway culture at the public library at Jane and Dundas. “It’s not Ojibway,” he said. “It’s Anishnawbe. We call ourselves Anishnawbe.”

Like other Natives I have been meeting recently, Ian was refreshingly frank as he spoke without bitterness and with  much humour. He explained about the terms “red Indians” and “aboriginal.” He told us about Indian agents and the outlawing of native ceremonies and languages.

He did speak about the origin of the drum. It started with the wars over a shortage of food  between the Anishnawbe and the Sioux peoples. The wars continued over the years even after the people forgot what they had been fighting about. Then one day, while a battle was raging nearby, a little Ojibway girl tried to run away from the screaming and yelling. She escaped to a wide river where she grabbed a hollow reed to help her breathe. She immersed herself in water over her ears.

The water kept out the painful noises. She saw the image of a drum. A spirit came to her and told her what to do. After the fighting ended, she returned to her village. She told her people that they were not living according to their own original teachings about love. She explained how to make a drum and told them to give it as a gift to their enemy.

The people listened to the little girl. They made a drum. They gave it to their enemy.  The fighting stopped. I hope I got the story right because there’s a lesson here for all of us.