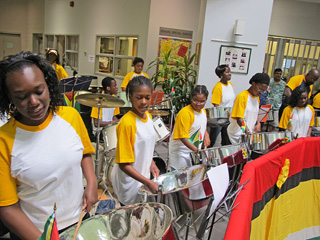 I attended the Guyana Independence Festival last year. It was small and confined to a community centre in Scarborough. It had a good community feel about it. People were friendly and answered questions readily. I didn’t feel out of place even though I was an obvious outsider. Someone told me the Guyanese prime minister was expected and we were waiting for him before anything could begin. I don’t know to this day if he was joking.

I’ve never been to a Toronto festival with a dominoes tournament. A softball tournament.  A cricket tournament. I’m aiming for curried duck this year. It’s a Guyanese specialty. And Jamaica is not the only country with steel drums.

The schedule and details are on:

http://guyaneseonline.wordpress.com/2011/05/31/guyana-45th-independence-festival-toronto-june-19-2011/. It should be fun again this year meeting Guyanese neighbours.