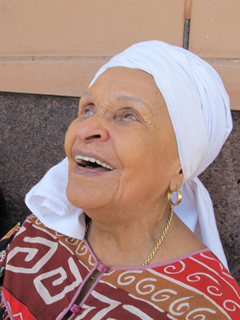 The soft drink Mawby looked like apple juice, but tasted bitter like cough medicine. The dancers all wore Indian dress. A singer sang in Hindi. These were among the surprises for me at the Guyana Festival last weekend.

The domino tournament attracted a lot of serious, tile-thumping men. “People play it all over the Caribbean, “said a competitor. “We’re not playing for money. The prize is a cup.” He grinned. “We play for the prestige of winning.”

I was hoping for curry duck for lunch. I remembered a curry duck competition last year, but alas for me, I didn’t find a booth offering it this year. It looks like I’ll have to try making it myself. A couple booths were selling ingredients for the Guyanese kitchen. I should have asked about a good restaurant. 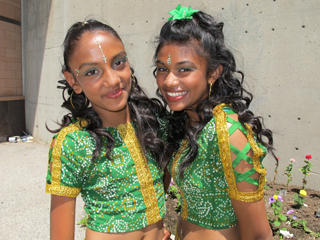 I took photographs of some of the young dancers. The name was Jagan. It sounded familiar and then I remembered that Cheddi Jagan had been a premier and president of Guyana. They were related. We have Guyanese royalty in Toronto!

I sat beside a stylish young woman who told me about Mawby. It is made from a tree bark, Its bitterness is an acquired taste that will be overcome. The label on my bottle said it was produced in Canada. The market for Mawby here must be big. A Google-search at home later revealed that some variation of this drink is found throughout the Caribbean. Some people believe it might decrease cholesterol. It could be a laxative. I couldn’t drink enough to make a test. 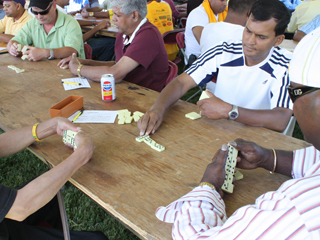 The master of ceremonies at the performance told a lot of jokes. Some of them put down Barbadians and Trinidadians. One of them indicated the superiority of the Guyanese mind over an American hotel manager. The crowd roared with laughter. Guyana has its  own version of Newfie jokes.

I was surprised by the faces and the dance costumes. The only Guyanese people I know are Chinese. The people at the festival looked Black or Indian or mixed. I only saw a couple of Chinese faces. 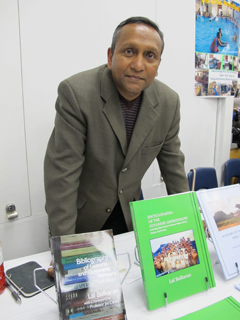 What did the national dress look like? Performing was a famous radio star named Auntie Comesee. She was wearing a turban and a colourful kaftan. Three women were in long Muslim dresses and hijabs. Most people were wearing jeans and tee-shirts. If you can judge by the dancers, the national costume was Indian. I hope someone will correct me if I’m wrong.

The atmosphere was generally friendly. Many people were meeting old friends. Those I spoke with seemed pleased to answer questions.  My non-Guyanese friend Anne had a problem. There was no wheel-chair access to the performances.

The parking lot was almost full when I arrived at noon. By the time I left at four, drivers were cruising for space. After I got home, I realized I should have read the Guyana web-sites beforehand. It mentioned the location of over-flow parking elsewhere. I also searched “Guyana” on the Web to find out about customs, history and foods. A festival is a great place to learn about a country and about our Toronto neighbours.