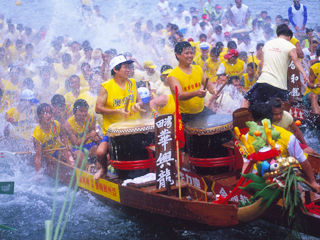 You can add Dragon Boat races to the list of Chinese inventions that changed the world.

Like paper, gun powder, and silk, they are of ancient origin, third century

B.C. to be exact. Today, you can find these races in over 60 countries with over 50 million participants. There’s an international dragon boat federation making rules and helping to organize international competitions. 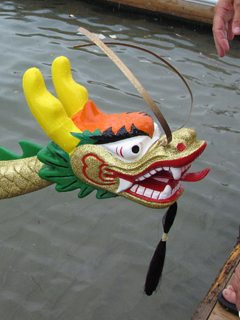 On June 25 and 26, races in Toronto will be at Centre Island. The organizers expect 180-200 teams, over 500 international athletes, and more than 100,000 participants and spectators. This annual event is organized by the Toronto International Dragon Boat Race Festival and the Toronto Chinese Business Association. It expects teams from Canada, U.S., Europe, Asia and the Caribbean.

This is a festival as well as race event. A Latin American and Caribbean village will offer food, artifacts and displays. You won’t starve if you stay the day. The races start at 8am and go on to 6pm each day. Expect long line-ups at the ferry.

These June races will have 11 teams of individuals with physical and developmental challenges. Many races now include teams of blind athletes, organ donors, and breast cancer survivors. Breast-cancer survivors will be wearing pink tee-shirts.

Hong Kong began the first international races in 1976. Their popularity spread quickly. Toronto teams have competed around the world since then. Israel will start its first races in 2012 on the Sea of Galilee. In 2012, Hong Kong will host the Eighth World Club Crew World Championships.

With corporations sponsoring individual boats, the competitions are great for team building as well as athleticism. The sport raises money for local charities.

The races were started on China’s Yangtze River to commemorate the upright poet-statesman Quyuan who drowned himself because his king, the king of Chu, did not heed Qu’s warnings about threats from the Kingdom of Qin. You might know that the king of Qin went on to become the first emperor of China. The original racers were intent on feeding the fish before they could get to Quyuan.

Each boat traditionally has a dragon head in front, about 20 paddlers, a drummer at the bow, and a steerer in the stern. Practises start in early spring, indoors in local swimming pools.

Other Toronto races this summer will be at Marilyn Bell Park. This is a much easier place to get to. It is located west of Ontario Place, adjacent to the lake, on Aquatic Drive (off Lakeshore Boulevard). Parking is limited but available for a fee at the nearby CNE grounds. You can get to the park by street car. Races will be from approximately 8:30am to 4 or 5pm. A few vendors will be on site.

Dragon boat racing is one of the most multicultural things you can do. For more information: